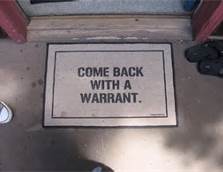 There is a very interesting case at the Supreme Court this week and oral arguments took place the other day. At question is whether or not the police can take DNA samples from those they arrest. The Fourth Amendment makes it quite clear that law enforcement officials cannot conduct searches and seizures  without reasonable cause. There are exceptions to this right for those who are arrested, fingerprinting being currently accepted as reasonable.

The particulars of this case are that the person arrested was swabbed for DNA and linked to, and eventually convicted in, a rape case from six years earlier. The DNA evidence was used in the conviction.

Those defending the right to swab arrested suspects argue that it helps solve crimes and puts offenders in prison. Justice Scalia points out that if the police went house to house searching everyone and everything that would also solve crimes and get convictions. This sort of unwarranted search is prohibited by the Fourth Amendment.

Justice Alito calls the case one of enormous importance. There are many people currently incarcerated who were swabbed in such a manner.

One argument that I hear frequently in favor of allowing law enforcement officers to use such tools is that only the guilty need be worried by these tactics. That if you are not guilty then why do you care? This argument completely fails to understand the point of the Fourth Amendment. The root of the law seems to be that in the colonies the government had the right to enter your house pretty much at will, largely under the rational of looking for customs violations. Imagine in today’s world if the police, sponsored by the Recording Industry Association of America (RIAA), entered everyone’s home looking for pirated music, movies, and literature, and software. We are protected from such intrusions by the Fourth Amendment and I’m leery of weakening it, as are the justices. But, let’s examine the case in question.

To a large degree the case comes down to how invasive the justices consider a DNA swab. Is it equivalent to a fingerprint or a search of you home? If the former then it is permissible, if the latter, then it is not. Certainly the ease with which the sample is obtained is more akin to a fingerprint as it can be done in seconds. Opponents argue that a DNA sample holds far more information than a fingerprint and thus the two are not similar.

In the case in question the arrested man was being charged with assault and evidence of a much more serious crime was found in their search. If the police arrest me for failing to pay a parking ticket can they then enter my home looking for evidence of any crime and convict me with anything they find? The Fourth Amendment says no. The Fourth Amendment says the police must obtain a warrant from a judge after showing probable cause. In this case the police had no probable cause to suspect the arrested man of the rape six years earlier and thus, goes the argument, the evidence obtained by the DNA swab was illegal.

It is a difficult case and I find myself torn.

A DNA swab is simple, easy, not intrusive, and the man was arrested for a crime to begin with. On the other hand I’m not sure I like the idea of the police arresting me for a crime and being able to take my DNA. The police can arrest and hold you for up to 48 hours, depending on the state, without any justification. Perhaps an officers doesn’t like me, arrests me for some made up reason, swabs me, runs the results through the database, and finds a distant relative of mine committed murder thirty years ago. This is not as unreasonable as people would like to think. The police arrest people all the time who turn out to be not guilty or not even remotely connected to the crime. It is part of their job to investigate all possibilities and arrest is a tool in their arsenal.

In the end I find that I choose to broadly interpret the Fourth Amendment. I think the police can take DNA swabs from suspects but that information cannot be used in unrelated cases. If they want evidence for a different crime they must go through the process of obtaining a warrant. This interpretation would set the rapist free and I can see how people will disagree with me. It’s a tough case and I eagerly await the decision.

Tom Liberman
Sword and Sorcery fantasy with a Libertarian Twist
Current Release: The Sword of Water ($2.99 for 300+ pages of daring deeds)
Next Release: The Spear of the Hunt