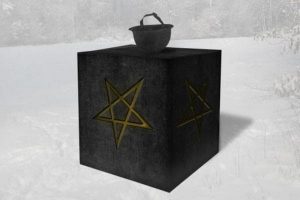 A satanic monument is scheduled to be placed in the Veteran’s Memorial Park of Belle Plaine, Minnesota. The entire episode came about because a Christian monument was placed in the same location and the Satanic Temple decided they wanted to honor the fallen with their own memorial. So, is Satanic Patriotism as good as any other kind of patriotism?

There’s a lot of talk about separation of church and state and the Constitution of the United States but I wanted to examine the more personal issue of how we feel when someone we despise does something ostensibly good. When we see Satanic Patriotism.

The monument the Satanic Temple plans to place can only be described as poignant. If it had Christian or non-denominational symbols on the side rather than Satanic, I feel confident in saying it would receive universal acclaim. The sentiment to honor fallen soldiers is also something that would normally be applauded. It’s the people placing the monument who are raising ire.

It should be noted the organization that manages the park, including many veterans, has apparently been very open and welcoming to the monument. That’s pretty cool, but the reality is a lot of people are quite opposed to it and vocally so.

Before we leap on those angry people, take a moment to examine how much you like that Ku Klux Klan sign sponsoring the highway you drive by on a regular basis.

One of the ways organizations like ISIS succeed is when they help people. They provide jobs and medical services to those in worn-torn nations. We certainly don’t like ISIS, they clearly engage in many horrific activities. But when they sponsor medical care to wounded children, isn’t that a good thing?

We have this tendency to put people and organizations into categories and that can be extremely damaging. When we decide Republicans are all good or President Trump is all bad, we miss out on opportunity and acquiesce to damaging legislation. If you are a Republican and support any piece of legislation from those you generally support, it is certain you are promoting some bad laws. If you hate President Trump and oppose every idea he puts forward, you are clearly working against some good legislation.

Not only are you promoting bad or failing to support good, but you are creating a world of black and white. Good or evil. This sort of categorization is what allows group like ISIS to thrive. When we as a nation refuse to admit our enemies engage in some very reasonable activities, we are making a mistake.

Would the world be a better place if we simply encouraged people and organizations who performed good deeds? If we discouraged those who do wrong?

Certainly, we can debate what is a good deed or what is a bad. We can say people do good things for the wrong reason, but does that make it less of a noble deed?

If you denounce a good thing because you don’t like the person who did it, well, who is the bad person?