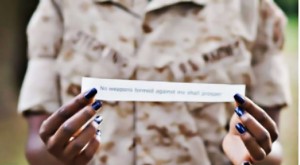 I happened upon a story about a young Marine who was given a bad conduct discharge when she refused an order. The order involved three pieces of paper she put on her monitor, computer, and inbox.

The papers had the words, no weapon formed against me shall prosper on them. This is a rather obscure biblical quote that is basically about prevailing against those who accuse you of wrongdoing.

In this case Cpl. Monifa F. Sterling was in a long-running dispute with other Marines and was facing several charges of disobeying orders. These included not taking her post when ordered. Here is the entire case for those who want to read. I’ll summarize.

Sterling injured her back. A medical report suggested that officers might exempt her from wearing “C” uniforms which could prove uncomfortable and also recommended she be exempt from standing watch or performing guard duty because of a “stress reaction”. Her superior officer decided that Sterling should wear her “Charlies”. Sterling refused. Officers spoke with the medic and then again ordered Sterling to put on her Charlies. Sterling refused multiple times.

Sterling was later assigned to distribute vehicle passes to family members of returning deployed service members a duty which would require her to stand for about three and a half hours. Sterling refused claiming the orders from the medic, a “chit”, overruled those of the officer. Then a major repeated the order to perform the duty. Sterling again refused.

She then placed the three pieces of paper around her desk. Her commanding officer ordered them removed. She refused. The officer removed them. Sterling put them back. She didn’t go up the chain of command, she didn’t file a grievance, she just put them back.

Now she is claiming that this was her favorite bible verse, the three pieces of paper represent the Trinity, and that by having them removed she is unable to freely practice her religions.

Bad language warning. Do not read the next line if you are easily offended.

The quotes were not religious, they were about her struggles with her superior officers and her unwillingness to follow orders.

Even if the quotes were actually about her religion, taking them down in no way prevents her from exercising said religion. No one is preventing her from going to church, praying, wearing a cross, or any other normal display of religion. I’m fairly certain that no religious person I know, and I know some deeply religious people, would think that their religion was compromised because they couldn’t tack up a couple of obscure biblical quotes on their desk at work.

Finally, she willfully disobeyed orders. You have to read the opinion fully to get it but Sterling’s chit suggesting she not perform guard duty was related to migraine medication that might make her dizzy. The medicine was to be taken at night so not to keep her from performing her duties. She decided to take it in the morning because she was later going to attend church where she thought she might get a migraine. Did you follow that convoluted argument?

Sterling sounds like the absolute worst kind of entitled child imaginable. No wonder her commanding officer wasn’t cutting her any slack.

I never served myself but appreciate those who do. I end this post with a heartfelt Semper Fi. Not for you, Sterling, you wouldn’t understand.

2 thoughts on “When Religion is Just an Excuse – Monifa F. Sterling”