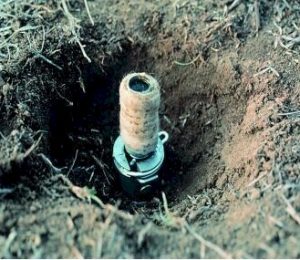 There’s an interesting legal case ongoing about a device called a M-44 Cyanide device which is used mainly in western states as a way to control coyote populations. One of the devices injured a young man from Pocatello, Idaho and killed his dog.

There are two elements to the situation that intrigue me. First is the case itself and second is the reason Wildlife Services places the devices at all.

The case is interesting in that the boy’s family describes the incident in which he was injured in a way that is largely impossible. They claim it exploded when he touched it but it has only a spring-loaded mechanism. It sprays cyanide when an animal bites the scented end and pulls with force.

The assumption here is that Canyon Mansfield likely did more than simply touch the device in order to set it off. That is the government’s argument for why they won’t pay damages. It’s probably true. They claim the Mansfield was negligent in handling the device and responsible for his own injuries.

Still, if I were in charge of the case I’d make the payment. It’s not going to set a precedent. People aren’t going to run out and mishandle the devices in order to get settlements. No one wants to be doused in cyanide.

The second thing I find interesting, from a Libertarian point of view, is why we are using the devices at all. Since the 1930s the United States has been placing the devices in order to kill coyotes and wild dogs. The M-44 Cyanide device killed over 12,000 coyotes in 2016 alone so they are clearly effective. This is out of the 76,000 the service killed overall. The reason we are killing such animals is they are a threat to livestock. Naturally they also kill pet dogs on occasion and at least 22 such animals were killed between 2013 and 2016.

I’m certain the Wildlife Service argues that far more pets and livestock would have been killed by coyotes if the devices were not used. My question is why is the government killing so many coyotes on public lands? The reason is simply because the United States leases these lands to ranchers in western states. The ranchers have livestock on the land and the government is spending your tax dollars to protect those animals.

This is at the heart of a number of problems, some of them having engendered major headlines in the last few years, associated with federally leasing such land. The ranchers depend on the land to feed their livestock. Without that land they couldn’t produce much of the beef we eat. Many of them have come to think of that land as theirs. However, if the land was owned by the ranchers they’d have to spend money to keep it up. As it stands, the government does all that work for them although the price of the leases mitigates the cost to some degree.

Basically, the government is killing millions of animals each year, yes, the number is that high, essentially to help out ranchers. There is pretty good evidence much of the killing is unnecessary. If the ranchers owned the land themselves they would probably carry out killings as well but because they don’t have an essentially unlimited budget, they’d probably only kill as many as necessary to protect their investment.

So why does the government own all this land which is being used largely by private industry? If you thought this problem was complex before, we haven’t even gotten started yet. That being said, I’ll give it a rest. I won’t bore you with the Bureau of Land Management, Native Americans, Public Land as a whole and the issues therein.