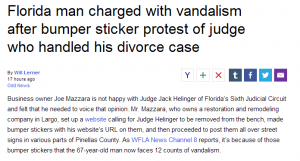 Florida man charged with vandalism after bumper sticker protest of judge who handled his divorce case reads the blaring headline from Yahoo Odd News. It certainly makes me want to see what crazy nonsense the police are up to today.

The implication is that the authorities in Pinellas County, FL are vindictively going after a man because he put a bumper sticker on his car lambasting the local judge. That’s not even close to the case. Joe Mazzara is angry at Judge Jack Helinger over events during the former’s divorce proceeding. He did make a bumper sticker that calls for firing the judge. It’s where he put the bumper stickers that the headline convenietly omits.

He put them all over public street signs. Hundreds of them. This is clearly not only a violation of the law in that he is defacing public signage but it’s also ridiculously dangerous depending on what part of the sign he chose to cover up. It’s even possible to argue that that accidents could happen because people are reading the signage when they should be focusing on driving. 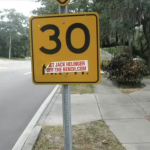 I’m not only not sympathetic to Mazzara but I think he needs to spend a little time in the county lockup. Maybe five days or something like that. He has the nerve to claim it is a First Amendment issue! If this is his general entitled attitude to life I’m not surprised the judge ruled against him.

Of course the real problem is that Yahoo is trying to convince people to click the story because it is another example of police and government abuse of power. I think there are plenty of times when people in authority do misuse their power but when they are doing their job properly we shouldn’t be trying to paint them with a damning brush.

Shame on you Yahoo. You win the Misleading Headline of the Week Award.