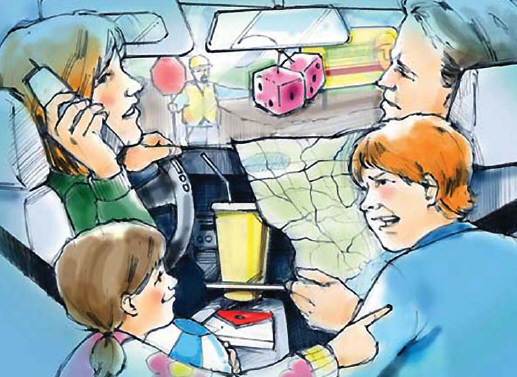 One of the municipalities here in my home state of Missouri just passed a law that would incarcerate people for up to 90 days if they are found guilty of texting and driving. Such texting laws have sprung up over the last few years in many states. I find this to be an example of legislation with the right idea but poor implementation. The problems are that the law covers a specific act and also doesn’t take into account various mitigating circumstances.

The entire state of Missouri bans texting while driving for everyone under the age of 21 although not for anyone older.

Here are my issues. The act covers specifically texting while driving but not anything else that could easily be a distraction. Eating, drinking, swatting unruly kids in the back seat, putting on your makeup, or jamming out on air guitar when Don’t Stop Believing plays on the radio (guilty). The other problem that my friend Lisa pointed out with a Facebook post was the idea of texting while the car is stopped in a traffic jam or at a long light.

This leads me into a Libertarian rant on the objective of a law and the actual legislation that is passed in an attempt to bring that law to the people. This is where everything often falls apart.

In this case what we want to stop is people not paying attention while the car is in motion, what is often called Inattentive Driving. Our legislatures, elected by us, often pass laws that do little to stop the underlying problem and end up causing more harm than good. I’m not opposed to laws against texting while driving; I just find it to be an exercise in futility. People will be inattentive in ways not covered by the law. It seems fairly simple to me that if you want to pass a law wherein people can be punished for driving in an inattentive fashion that going after the activity piecemeal is a bad strategy. Why not just make a law against inattentive driving?

An officer sees you driving inattentively for whatever reason and tickets you. You can take the case to court and argue with a judge or pay the fine because you were actually in violation. This is an example of a simple law with each case adjudicated by the individuals involved. Naturally we must take precautions against overly eager police officers but that is the case with the texting law. It’s certainly possible to cite a driver for the violation even if the driver isn’t actually driving at that moment, stopped at a light for example. Or to charge a texting driver while ignoring someone else being even more inattentive for a non-texting reason.

It won’t be long before people are driving fully automated cars and they should certainly be allowed to text, watch TV, take a nap, or just about anything else while the car is in motion.

One of the ways to lead a productive life is to determine the nature of the obstacle that confronts you before beginning to try to find a solution. If you do not understand the problem your attempts at a resolution are often doomed to failure.

In this case, the problem is Inattentive Driving, not Texting. Make a law that addresses the problem.

There is a relatively small situation all over the news lately that I find endlessly interesting and worthy of discussion. A yoga teacher in San Francisco was fired from her position at the Facebook campus two weeks after giving a dirty look to a student who was texting in class. This is interesting to me for several reasons.

I take yoga classes, I’m big technology guy, I’m a teacher, and I’m a heavy user of social media. My good friend’s wife is the Social Media director at Siemans and I’m interested to see what she thinks about this case. I think it brings up several incredibly interesting points.

To start with I noticed the heavy preponderance of comments sided with the yoga teacher in question. They ran the gamut from suggesting lawsuits to vilifying the texter and I’d say it was about 50 – 1 against the firing. I’m going the other way on this one and I’ll tell you why.

As a teacher of adults I fully understand that the paying students are in my class on their time. They could be doing a lot of things but chose to pay money to take instruction from me. I think this is a fundamentally different situation from a primary school teacher whose students are children. Generally when a phone rings during class, my reaction is to tell the student that it’s not a problem. If they have to take care of business step outside and I’ll catch them up on the material when they return.

When I see students texting or checking their email during class I simply ignore it. These are adults with real jobs and in modern society jobs are not 9 – 5 anymore. It’s likely that my students are going to get important emails, texts, and phone calls during my class. These important work related items must be dealt with and are, in the big scheme of things, far more important than my class.

What’s not at issue here is that it was a ringing phone. Ringing phones can be a distraction at any sort of public gathering because they intrude on the other people. In this case the yoga student was answering a text. In yoga class a ringing phone is an issue because it takes focus away from the pose at hand. A text, on the other hand, is a quiet activity that is largely not distracting. I would equate it to a student who during a strenuous pose decides to move to a rest position. It’s not what everyone else in class is doing but it’s not disruptive in any way.

I also have an issue with the teacher giving the student a disapproving look. Again, we are adults here. I think the best way to handle a disruptive situation, which I don’t think this rose to a level of being, is to tell the student you understand work is important and to please take care of it outside.

In this particular instance it was to a group of Facebook employees! To be surprised and annoyed that they might be texting during class seems not particularly thoughtful to me.

Of course, it’s possible that the yoga teacher in question was not a good teacher for other reasons but that’s not really the question in this case. Maybe she was a great teacher. I just don’t think publicly chastising an adult student in a class is generally a good plan. There are certainly times when disruptive behavior must be dealt with but I’m of the opinion that this case did not come anywhere near that line.

Should she have been fired? Not if this was a one time incident, in my opinion. I think a quick session in which it was explained to the instructor that her Facebook students get important texts and will be dealing with them is part of the class. Communication!

What do you think? Was the yoga teacher perfectly reasonable? Was she unreasonable? Tell me in the comments!