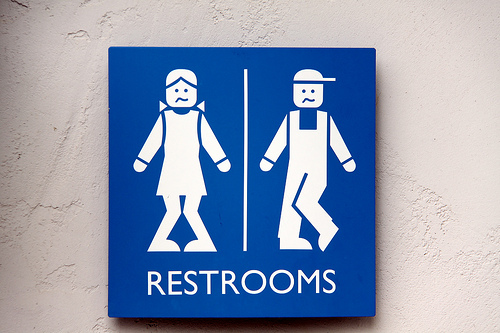 There’s an interesting little case roiling the internet about a school in Vancouver where a couple of third grade girls urinated on themselves in the classroom. They claim they were denied access to the bathroom although the school district says no one is ever denied such access if they declare it’s an “emergency”. We’ve all been there.

What makes this case interesting is that the school has a policy in place where students earn currency in exchange for doing various things like homework. They spend this currency on various items including snacks and going to the bathroom during class. The idea being to teach kids the value of money.

One of the girls in question spent all her money on other things and was unsuccessful in her attempt to control her bladder.

I’m ambivalent on this. I really like the idea of teaching young students money management skills but I don’t think going to the bathroom should one of the fee items. Basically the kids will always try to hold it to avoid paying the fee. This is not a good idea.

I suspect what happened here is that the girls in question ran out of money and didn’t ask to go the bathroom because they thought without enough money they wouldn’t be allowed to go. Perhaps they were embarrassed to ask without having enough money.

I’m sympathetic to teachers who get frustrated when students ask for bathroom breaks too frequently but who is to say if someone has to go to the bathroom? If you gotta go, you gotta go. Not that I think that’s what happened here. I think if the girls had told the teacher it was an emergency they would have been allowed to go. The teacher can’t be expected to read minds.

I can even see some objection to the monetary rewards for doing homework and being “nice” to each other. Who decides what is nice and what the payment will be?

My final take is that there is nothing wrong with this sort of system as long as the rules are spelled out and there is some oversight to make sure teachers aren’t playing at being little kings.

In the end, sometimes people can’t hold their bladder. Sure it’s embarrassing to pee yourself. Life is filled with such unhappy events. It’s not the end of the world.