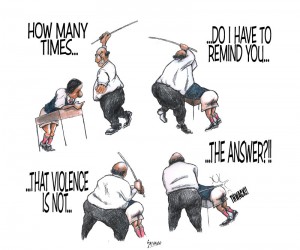 Child abuse is in the news in the NFL these days because of incidents surrounding Minnesota Viking’s running back Adrian Peterson and his four year old son. I’ve been reading and watching comments on the story including those made by Charles Barkley and everyday people in the section below the stories themselves.

There seems to be a trend that while Peterson may have “gone too far” that the old biblical admonishment to spare the rod is to spoil the child holds wisdom.

I’m going to be clear. Every time you use corporal punishment on your child you increase the odds the child will grow up and commit crimes. The more you hit a child the better chance there is that child will break laws, will rape women, will murder, will become a sociopath. Every time. The statistics are overwhelming. Children that suffer more physical violence in the home are more likely to be violent in society, to break laws, to hurt others. Study after study shows the same thing.

Children who grow up in homes where violence is not used are generally not violent themselves. The biblical adage is the opposite of the truth. It’s called a lie.

Children subject to violence become violent themselves. The more violence to which they are subjected the more anti-social they become. It is readily obvious to me that children who learn violence as a way to solve problems will naturally gravitate towards violence themselves. I don’t need a million studies to prove that point. The studies exist. I’d urge anyone who disagrees with me to do some research on the subject.

They’ve put video cameras in the homes of parents who claim they only hit children who are misbehaving and always do it with an explanation of what the child did wrong so it is a learning moment. It turns out most of the time the parents hit the child on the spur of the moment with nothing more than a “no” or a “stop”. That the intensity of the punishment is generally without regard to the transgression of the child but completely related to the mood of the parent. Tired parents, frustrated parents, angry parents, hit longer, hit harder, and do it with less provocation.

I can’t really write a lot more on this subject. Virtually every scientifically sound study shows exactly the same thing. There is no benefit to corporal punishment and great harm is possible.

The statistics just tell us patterns and trends. They do not predict exactly what will happen to every child in every situation.

My advice is simple. Don’t hit your child.

I don’t have any children although I think I can understand a parent’s frustration and anger at a misbehaving child. I can understand the desire to lash out. To harm. I don’t think a well-deserved spanking is going to turn a child into a criminal. I do think the statistics are clear. The evidence is clear.

Avoid corporal punishment as much as possible and your child will be better off. That is the outcome we desire. Healthy and well adjusted children who grow into better adults.