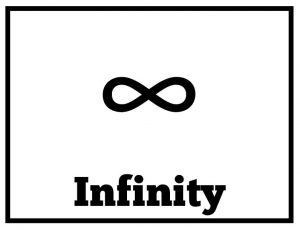 It would seem at first glance the two concepts are incompatible. If there is a final, last number, then infinity cannot exist and vice versa. Here’s the factor that existing theory, in my opinion, fails to take into account. Neither numbers nor infinity are real. That is to say they are both incredibly useful constructs but they don’t actually exist. In the same way the words you are reading don’t really exist, that emotions like love and hate don’t have physical form.

Sure, we feel love. I’m not denying we have emotions. Nor do I pretend the words I have written and you are reading don’t have meaning. I’m just saying they only exist as constructs of the human mind that help us organize our world in convenient ways. Words are merely jots on a page approximating sounds. We give those sounds meaning in the same way we give letters and groupings of letters meaning they do not actually have.

Numbers are wholly constructed to make life easier to understand and move through. Time is likewise a human construct that simply does not actually exist in a physical way. You cannot weigh an emotion, a number, a word, or a unit of time. These things are all incredibly useful. We would not have the world we live in without these constructs but they are simply that, constructs.

If numbers don’t actually exist, which is my assertion, then the last number is simply the largest number we have so far named. Certainly, a larger number can be imagined but until that moment; it does not exist, even in a constructed fashion. Currently we can say that Graham’s Number is the largest number in the world. That being said, the concept of infinity is also a human construct and exists as such side by side with Graham’s Number.

Pi does not really exist and therefore the last digit of Pi, base 10, is the one we have most fully calculated. Thus, Pi has a last digit but is also infinite.

What are the practical implications of my hypothesis? Nothing, really. The world is the same whether or not we consider numbers to be real or simply constructs. My life does not change nor does yours. However, once I accepted this idea, that time, numbers, words, and emotions are merely names we associate with constructs in order to make our world more orderly, the less importance they have. They are tools to be used to achieve results but I need not worry about their bounds or origins.

Who created the numeric constants of the universe? Us, simply because they don’t actually exist.