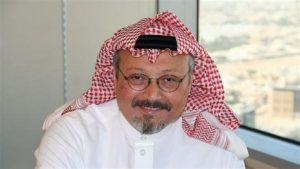 Why all the faux outrage about the regrettable and accidental death of Jamal Khashoggi over a little bit of harsh interrogation? These things happen. It’s war. The safety of the nation is in the balance. We can’t tie the hands of our intelligence community, that would be putting our lives at risk. Our friends the Saudi Arabians have used harsh interrogation techniques on prisoners we sent to them in extraordinary renditions. The head of the CIA, Gina Haspel, was in charge of such a prison and accidently destroyed many tapes where such useful and humane techniques were used on evil journalists, er, I mean, terrorists.

The former Vice President of the United States, Dick Cheney, is a vocal and active supporter of such techniques. Many of my good Christian friends have told me personally they support enhanced interrogation, in between patting themselves on the back and going to church. Our Secretary of State, Mike Pompeo, has rightly and with the power of the holy spirit denounced efforts to end our heroic use of harsh interrogation and black prisons. It is Pompeo who was sent to consume excellent food and pat his belly in bloated satisfaction while meeting with the architect of this supposed crime, Prince Mohammad bin Salman. I’m sure they enjoyed a good chuckle at all the phony outrage.

The United States of America is a leading proponent of harsh interrogation techniques and happily uses countries like Saudi Arabia, Afghanistan, Turkey, and many others to carry out our bidding. President Trump himself has rightly suggested harsh interrogation is an excellent and useful technique. Sure, sometimes a prisoner dies, but it’s obviously well worth the risk.

In a representative republic, our politicians reflect our moral and ethical outlook. We clearly want harsh interrogation and relish in punishing those leftist journalists, er, I mean, terrorists. This will clearly send a good message to the leftists that they can’t write negative stories about our glorious leaders. If you don’t want to be subject to harsh interrogation techniques while being held against your will where you might well accidently pass away, well stop writing such articles. It’s fairly simple. Get a clue, idiots.

Why pretend to be outraged at all? Own it. Amerika!