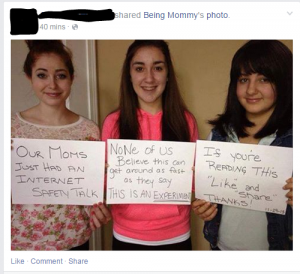 One of my friends recently shared a picture from the Facebook page “Being Mommy” and it made me perhaps a little angrier than it should have. Basically it shows three female teenagers claiming they spoke with their mothers about how fast things spread on the internet and wanted people to share and like it as a experiment.

They knew exactly how fast things spread on the internet and created the picture largely hoping to get publicity from news sources like Being Mommy. It apparently worked much to my disgust. What their parents didn’t teach them is to be honest, to have integrity, and to not manipulate other people.

I’m not certain why this picture annoys me so much but there is no doubt I’m angry. It’s just so fake, so manipulative, so grossly calculated that it makes me burn. I’m angry that so many people are willing to fall for such nonsense without so much as a second thought.

Shame on the girls! Shame on anyone who shares or likes the picture!

Enough wasted time on that.