There’s an interesting story in the news about a woman named Sherry Tina Uwanawich because the courts ruled she defrauded a family of $1.6 million by claiming they were under a curse. Uwanawich was ordered by the court to repay the money and sentenced to more than three years in prison. The argument of the government is that there was no curse and the money was fraudulently obtained.

So, why am I writing about this incident? Uwanawich took advantage of a gullible family and stole their money, she deserves what she gets, right? Well, in the same way you think curses aren’t real, I think religious salvation isn’t real. How much money is given to churches for fake salvation? I’m sure many of my friends and readers are certain that religious salvation is real but so too the family Uwanawich exploited was certain curses were real.

Can we prove curses aren’t real? Can we prove god isn’t real? Can we prove there isn’t a teapot orbiting the sun midway between Mars and the Earth? Perhaps Uwanawich actually saved the family from a terrible curse and their $1.6 million was well spent. The amount certainly pales in comparison to the amount of money various churches collect from their devotees. People pay money to those who take advantage of their nonsensical beliefs all the time and yet, for the most part, we don’t find it criminal. What’s different about this case?

Don’t get me wrong, what Uwanawich did to that family was reprehensible, but do the family members not bear much of the responsibility? They certainly handed over the money eagerly and willingly and presumable avoided the dread consequences of the curse.

In that far distant future in which Atheists come to power should they have the ability to put your local religious leader in jail for defrauding you? It’s a question needing an answer and I’ll happily tell you what I think. No. Religious beliefs, whether curses or salvation, should be out of the purview of the courts. Believe what you want and suffer the consequences, financial or otherwise, that’s your business. 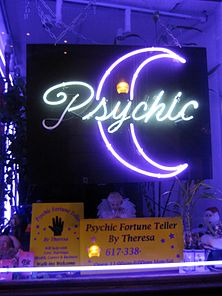 Sadly, psychics are in the news again and things don’t seem to have changed much from the times of the ancient Greeks with the Oracle of Delphi to current times and  John Edwards. As a Libertarian and Objectivist I’m torn by this particular industry.

On the other side I see fraud against people who are at their most vulnerable. It seems fairly common that a psychic comes forward to give misguided hope to the family of a missing child, for a price. This sort of financial manipulation of grieving family members is truly vile and, in my opinion, rises to the level of criminality. Anyone who goes to a psychic is vulnerable in some way and they are being manipulated.

I’m not going to spend your valuable time trying to prove how ridiculous is the entire psychic industry nor how vile are those who take advantage of people in a distressed mental state. What I’d like to discuss is the culpability of the average person in this industry. My friends who go to a psychic fair, the parent who reads a horoscope to their child, the match-maker who uses astrological birth-signs to set up couple, all of these people are supporting an industry that preys on grief-stricken people.

A 2005 Gallup poll indicates that 41% of people believe in some sort of extra-sensory perception. However, I’m not willing to dismiss this group as hopeless. I think it’s clear from story after story that psychics prey on vulnerable people and far more than 59% of people find that disgusting. Even if you’re in the 41% who believe in some sort of psychic phenomenon you most likely despise this sort of manipulation.

So, I ask the 41%, is it worth it? Is the fantasy of psychic powers, of someone knowing the future, worth the damage it entails?

To the 59% percent I say, don’t stand idly by when your friends go to psychic fairs and read their daily horoscope. You don’t have to tell them they are stupid, that psychics are wrong and vile. Just say, out loud, that you don’t believe in that sort of thing. Every time you hear someone talking about such things; politely interrupt and say that you don’t believe it and then don’t participate in the conversation.

When we skeptics stand up, politely, you never know who we might inspire.