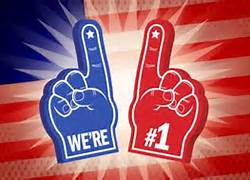 I’ve been hearing the term American Exceptionalism bandied about a lot lately and I thought it was good fodder for a blog. I think there are a lot of definitions as to what it means.

I’d urge you to read the Wikipedia Article but I’m going to go over some highlights and tell you what I think of the idea of American Exceptionalism, particularly the modern interpretation.

The first we hear of American Exceptionalism is from Alexis de Tocqueville and his book Democracy in America. He didn’t use the term exactly but it’s the origin of the idea. What de Tocqueville meant was that America was physically separate from Europe and its long political and social traditions. This meant that America could do things in a different way. He means that America is an exception to the traditional rules. He does not mean that Americans are exceptional as in superior.

This meaning of American Exceptionalism is no longer valid. The idea that we are physically separate from the rest of the world is just not true anymore. World economies are now intertwined and the politics of one nation directly influence others regardless of physical distance. If you subscribe to de Tocqueville’s definition then it no longer applies.

In the 1920’s and 1930’s Communist Russia was on the rise and there were many that felt the United States would be the next nation to embrace communism. A fellow named Jay Lovestone was originally a communist but eventually became fervently anti-communist. He argued that the United States was immune to communist ideology because of its strong capitalism and apparently limitless resources. A fellow by the name of Joseph Stalin refuted this argument and was the first to use the words American Exceptionalism.

The United States eventually rejected communism so it can be argued that Lovestone was correct and our exceptional circumstances granted us this immunity. This definition of American Exceptionalism proved at least partially accurate and our strong capitalistic history continues to mean that communist ideology has difficulty gaining a foothold. Therefore, for those of you who subscribe to this definition, it is still true.

Now I get to what happened in the late 1980’s and the rise of the neoconservative movement. This is real purpose of my post. Neoconservatives define American Exceptionalism as meaning that people born in the United States are superior to other people simply by the geographic location of their birth. That our nation as a whole is superior automatically.

From an Objectivist, Libertarian, Randian point of view I can say without hesitation that this idea is antithetical to everything I think is true. What makes a person exceptional is what happens after birth and has nothing whatsoever to do with their physical location when emerging from their mother’s womb.

To anyone who believes that this is the meaning of American Exceptionalism I absolutely and totally reject your argument. This is a concept espoused by an entitled person, a weak-minded individual who doesn’t know what it is that makes people superior, exceptional.

To anyone who believes this nonsense I say; read Ayn Rand.

If you want to be exceptional, superior; get to work doing it. It’s not easy. It requires hard work, it requires attention to detail, it requires boldness, it requires strength of will. It doesn’t matter where you were born, what language you speak, how tall you are, how big are your breasts, or anything at all regarding the circumstances of your birth.

Every person can be exceptional. The nation that has the most exceptional people succeeds.