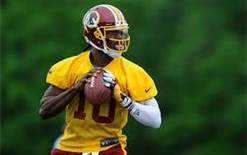 As my one or two loyal followers well know; sports is my first love. Long before I was writing Ayn Rand tribute novels dedicated to the ideas of Objectivism and Libertarianism I was living and dying, mostly dying, with the St. Louis Cardinals (football and baseball) and St. Louis Blues sports teams. While things have changed to some degree, I still love sports.

Last night I was doing some research into ACL injuries because of the Robert Griffin III situation with the Washington Redskins. I have an oar in the water on this one. My beloved, yes, I said “my”, read my Cardinals blog on the subject, my beloved St. Louis Rams have the Redskin’s first round pick next year and the year after. So, if RG III is disabled that would seem to indicate this pick might be of more value.

That’s not the subject of my blog today. What I want to talk about is how people use willful ignorance to avoid responsibility. Griffin is just my example.

The evidence that this is the case is a bizarre exchange between the doctor and the head coach of the Redskins. Griffin suffered an injury in an earlier game, came out for a play, and then went back in. Coach Mike Shanahan was asked about the incident and said that the doctored said it was ok for Griffin to return. The doctor, days later, denied even examining Griffin or clearing him saying he was very concerned by his return. Later the doctor hedged saying he didn’t examine Griffin and the quarterback went into the game largely on his own although the doctor gave some sort of a signal to the coach indicating it was ok for Griffin to return.

Here’s what really happened, in my opinion. Griffin partially tore his ACL at that moment. He knew something was wrong and avoided the doctor because that’s what incredibly tough football players do. Then he went back into the game. The coach didn’t want to ask the doctor because he wanted Griffin in the game. The doctor didn’t insist on examining Griffin because he also wanted Griffin in the game. The next few weeks the Redskin willfully pretended that things were ok by not doing thorough examinations. They didn’t want to know because knowing might be bad.

In the grand scheme of things this isn’t a huge deal but it mirrors something I see in today’s society and particular in our supposed leaders. These are the men and women who are supposed to be setting examples for all of us. They are our leaders, the men and women Ayn Rand writes about, the high achievers.

In the George W. Bush administration there was willful ignorance about our soldiers brutally torturing prisoners of war. There was a willful unwillingness to pass along information about the murder of a true Randian hero, Pat Tillman. President Obama didn’t know anything about the situation in Benghazi. Executives at Enron had no idea of the financial manipulations. The housing industry’s meltdown was systemic but no one wanted stand up and make hard decisions. No one wanted responsibility and underlings knew this and thus willfully refused to pass along pertinent information.

Rand writes specifically about this in the early chapters of Atlas Shrugged with Dagny Taggart makes a hard decision about the train on which she is riding. The people who are supposed to make the decision are paralyzed with fear that they will make the wrong decision and do nothing. She steps in and takes charge.

Failing to heed the moral of this story will bring this nation down. Leaders need to lead. They need to make hard decisions and sometimes make incorrect decisions. Voters need to elect those who are willing to make tough decision and be less eager to attack anyone who makes a mistake. Business leaders must lead instead of grub for more money and bail themselves out with golden parachutes.

I don’t want to be overly negative here. All is not lost. There are many leaders out there who are not afraid to make tough decisions and want what’s best their company, their constituents, their soldiers, and their country. Not only must such men and women step forward but we must honor those who do so and stop making excuses for those who don’t, even if they are from the party for which we vote.

Reward courage. Reward loyalty. Reward honesty. Reward honor. Reward kindness. Stop rewarding cowardice, betrayal, hate, and greed. Stop it in your own life wherever you encounter it, in the little things, in our everyday life.