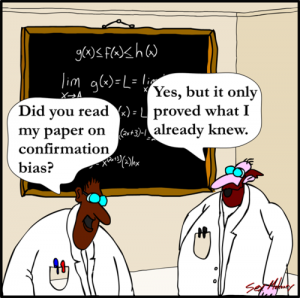 I just read what appears to be a well thought out article from the Huffington Post about the decline of Olive Garden restaurants and the meaning this has for our overall economy. At first read it appears completely reasonable but it’s not. Happily it gives me the opportunity to talk about an incredibly important logical fallacy called Confirmation Bias.

The article itself looks into the declining market for Olive Garden and Red Lobster which are owned by Darden Restaurants. It then compares them to their high-end Capital Grill restaurants that saw growth in the most recent quarter. It then concludes that because the middle-class catering restaurants are seeing declining sales and the high-end restaurants are increasing this clearly means that the middle-class is suffering while the upper-class is thriving.

I’m not going to say the argument is completely false but it’s a classic example of Confirmation Bias. Yes, Olive Garden and Red Lobster have seen dramatic losses in the last few years but at the same time Fast Casual restaurants like Chipotle, Qdoba, and Panera (or St. Louis Bread Company as we call it here in St. Louis) are growing by leaps and bounds. These are clearly not high-end restaurants.

So what is Confirmation Bias? It’s the willingness to look only at facts that support your preconceived notion and either ignore or simple refuse to look at other factors that might not support your hypothesis.

It’s a very easy fallacy to fall into. When you see a post on Facebook that confirms what you believe there is the instant urge to Share and Like that post without even reading the article that is behind. This almost happened to me in regards to an article about Hospice Care that a friend posted on Facebook. When I went and actually read the article I saw that it was heavily biased.

We so badly want to believe that certain things are true that we are willing to accept any evidence that supports this point of view while ignoring those facts that seem to contradict our hoped for conclusion. This is an extremely dangerous fallacy. Just ask the brave men and women who served our country in Iraq ostensibly because they were going to stamp out the proliferation of Weapons of Mass Destruction.

This fallacy is pervasive in today’s political culture where ideology trump facts. When we make important political decisions based on what we want to be true then we are doomed to making horrific mistakes.

What I’m saying is that the reason Olive Garden and Red Lobster are struggling might be because of the changes in economics for the Middle Class but there are likely other reasons as well. Certainly other Middle Class aimed restaurants are doing quite well. I’m sure there are a number of fine-dining establishments that aren’t doing very well. Can we assume the rich have less money?

The next time you hear someone make a claim that seems to support your position pause for a moment. Examine the facts from a Critical Thinking perspective. Do your homework. Think twice before Sharing that Facebook post.

The bottom line is that when we make better decisions we experience more favorable outcomes. Better decisions are driven by complete information. When we fall into the trap of fallacies we make worse decisions. When the people of a nation make bad decision after bad decision there are bound to be serious repercussions.