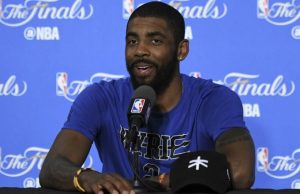 Who was it that said something about casting stones?

There’s an article all over the news today about a basketball player named Kyrie Irving who believes the earth is flat. The comment section is filled with scorn. The same commenters who generally flood stories with absolute belief in many things without any supporting evidence.

President Trump vacationed with Vladimir Putin before the election.

90% of the Ninth Circuit Court Decisions are Overturned by the Supreme Court.

Richard Gere and the Gerbil.

All these things are nonsense and yet the very people calling Kyrie Irving all sorts of names believe stories exactly like those I listed above. Do you? I’d guess the answer is probably yes. You believe something that is completely false. There are reasons for this.

Perhaps the story matches up with your political or personal beliefs and you’d like it to be true so you don’t investigate or willfully ignore any evidence suggesting the story is false.

Perhaps the story was told to you by someone you trust, so you didn’t bother to investigate because of that trust.

Perhaps you are stupid.

All these things are possible and I would venture to say there is no one who has not fallen into the trap at one point or another. Kyrie Irving believes the Earth is flat. He’s wrong but I’m not going to convince him, you’re not going to convince him, no amount of evidence is going to convince him. He’s going to have to decide for himself to investigate the topic, look at the all the evidence, and come to a conclusion that ignores his preconceived notions. Easy, you say? Then you do it. Do it in every aspect of your life. Do it for every political story you read.

In my Libertarian Group of supposed Free Thinkers there are scam artists everywhere. Some make promises about freedom and life in South America while stealing money from members, and yet they are supported almost endlessly. Some rave and rant about problems that simply don’t exist. There is no shortage of those who believe in defiance of evidence. I would say anyone who denies Evolution is such a person and that includes a healthy percentage of my friends.

Before you start throwing stones at Irving, take a look in the mirror.

And, of course, try to apply Critical Thinking skills to all aspects of your life.