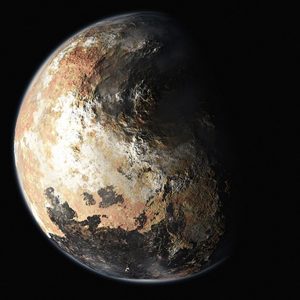 Is Pluto a planet or a dwarf planet? This question has roiled both the scientific and public world for the last twelve years. When it was discovered way back in 1930 by Clyde Tombaugh it was given the designation of planet. In 2006 the definition of what is a planet was changed and the little, relatively, world was reclassified as a dwarf planet.

I well understand the need to classify things so that we can communicate. Without definitions we have a difficult time expressing meaning to one another. In this case the reality is the only thing of importance. The designation means nothing. Pluto was discovered by humans back in 1930 but it has been galivanting about the solar system for billions of years in largely the form it is today. There is no name we can call it that will change its nature. Planet, Dwarf Planet, Kuiper Belt Object, whatever, it is the same. It is only we people who are upset about the classification and that is, to my way of thinking, somewhat telling.

Why do we care? Will it make any difference in your life? If Pluto is a planet are you better or worse? Is Pluto any different? The designation is merely so we can communicate effectively and the reality is in this case it doesn’t make any difference. The only chance of any confusion occurs if we are talking about the Disney character rather than the orbital body.

The question becomes why is it such a contention issue? Why do people have their own self-worth wrapped up in the fact that Pluto is or is not a planet? I cannot say for certain but I suspect the cause is related to our ego. We want to be right. We want to be better and smarter than the other people. We find like-minded allies and pat ourselves on the back at how smart we are because we know Pluto is one thing or another. This somehow validates our feelings about ourselves and that’s a shame.

Pluto is what Pluto is, regardless of the designation we give it. You are who you are, with no importance given to what others may call you. Nothing changes. The kind of person you choose to be is defined by other things: The way you behave towards others, the things you say about other people. Your behavior defines you. Your existence. Not the names people call you, that’s their problem.

What makes you a better or worse person has nothing to do with how others designate you. You are you and so Pluto is Pluto.