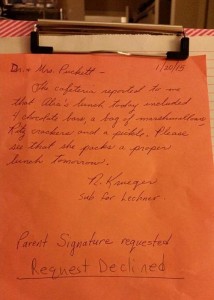 There’s an interesting story from the field of education making the rounds this morning and I think it’s pretty instructive in a couple of ways.

What happened is that a teacher at an elementary school in Kirksville in my home state of Missouri sent home a note asking parents to pack a better lunch for their child. According to the information given to the teacher the child’s lunch consisted of four chocolate bars, marshmallows, crackers, and a pickle.

The parent wrote a rather nasty reply that described the lunch contents in a more favorable light which included meat and cheese and an absence of crackers as the contents. An administrator apologized for the note and made it clear that it would not happen again.

The comment section seems pretty heavily in favor of the parent and suggest that the teacher overstepped his or her bounds (no information was given on the teacher in question). I largely disagree although I’m not completely on the side of the teacher. I think the note should have taken a gentler tone and first confirmed that the lunch was as described and then perhaps included information and links to studies on the importance of eating a healthy lunch as it pertained to performing well in school. That being said, I think the note as a concept was absolutely appropriate for someone with Libertarian beliefs.

I’m reminded of one of the early scenes of Atlas Shrugged when the train is in danger of running late and the man responsible for making sure it won’t happen refuses to accept the responsibility and eventually Dagny Tagger is forced to step in and make the decision.

In this case the lunch as reported to the teacher was clearly substandard. The teacher, being someone of conscience, someone of personal responsibility, decided to take on the matter personally. This teacher clearly takes an interest in his or her children and wants them to succeed. The teacher did absolutely the right thing in writing the note. As I said, the note should have tried to confirm the lunch contents and been gentler in tone, but it is the hallmark calling card of someone who cares, who is willing to make a decision, and most importantly, willing to take action.

The father should have written back explaining that the lunch was not as described and THANKED the teacher for caring, for taking the time to worry about his child. He should have told the administration that they had a great teacher and he was proud his child was in that class.

The result? The teacher shamed. Any other teacher who sees a problem with a student will now be reluctant and probably unwilling to take any sort of independent action. Teachers will have to check with ten layers of administration before sending a note home to a parent.