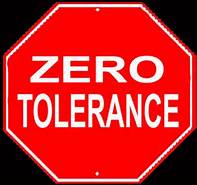 We haven’t had many of these zero-tolerance stories in the news lately but there is a big one out now.

In this case teenager Erin Cox went to pick up a friend from a party. The friend was too intoxicated to drive herself. When Cox arrived the police showed up as well and gave a summons to every underage person at the party. Cox violated the schools zero-tolerance policy for students attending parties in which alcohol is served. She was suspended for a few games from her volleyball team and removed as captain.

There’s a lot of outrage about the ruling because Cox was there not to party but to help a friend. That Cox is being punished for helping  her friend avoid driving drunk. I totally agree with the idea that Cox is blameless in this but I want to look at the idea of a zero-tolerance policy and what it really means: Zero responsibility.

The stated idea behind a zero-tolerance policy is to ensure the safety of people, generally students. The danger of drugs is so terrible that we cannot allow any drugs in the school; including aspirin. The horrors of teenage drinking and driving with its attendant accidental deaths is so great we must protect our students by punishing anyone going to a party where alcohol is available.

The reality behind zero-tolerance policies is that adults are afraid to make decisions. Zero-tolerances gives them the opportunity to mete out punishment without taking any responsibility.

Why are they afraid? Because if they give different punishments for the same crime based on circumstances they will be sued by the other parents, accused of favoritism, racism, nepotism, and just about anything else. They could lose their livelihoods in the storm of lawsuits that will follow.

Why are lawmakers afraid to make legislation? They will lose their job. That’s why we have a dozens of Propositions on the ballots when in a Representative Republic our elected officials should make decisions. It is why there is gridlock in Washington D.C.

Why does our legal system rely on mandated sentencing guidelines?

I’ll tell you why. Our society is filled with people more than happy to blame everyone else for what is wrong with their lives. Listen to a politician talk and if lips are moving, someone else is being blamed. It’s not just politicians. It’s everywhere and it’s rampant. Read the comments on any news story about anything. It’s always someone else’s fault.

Anyone who stands up and takes a position is bulldozed in the ensuing blame Olympics. I’m not surprised that schools enact zero-tolerance policies out of fear. I’m not surprised that Cox is being punished for her actions. Zero-tolerance means no one has to make a decision. That all decisions are mandated and that means that the person making the decision can utter the most useful phrase in the United States, “Blame Canada!”

So, in this latest case who are we blaming? The administrators who created this policy out of absolute fear that they’d be punished no matter what decision they made about student drinking. Whose fault is that? Look in the mirror. It’s your fault. It’s my fault. Our willingness to blame everyone but ourselves is to blame.

You don’t like zero-tolerance policies? Then stop blaming everyone else when something goes wrong.

You don’t like our useless government? Blame yourself and start voting better.

You don’t like your job? Go out and get a better one. Educate yourself. Work hard.

Your kid got the raw end of a deal? Tell them that’s life. Watch out in the future.