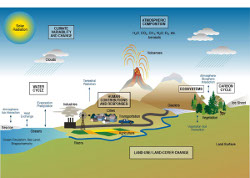 Today I take an actual position. I’ve waited all week and tried to examine the various issues of human driven climate change from a critical thinking perspective. I think the evidence goes both ways to some extent but, by and large, the model that resonates with me is the idea of a bathtub filling with water.

Non-human, “natural causes”, pour huge amounts of CO2 into the environment but in response non-human forces pull it out of the system. These “sources” and “sinks” largely balance one another although catastrophic events in history, super volcanos and meteor strikes, have sent them disastrously out of equilibrium for tens of thousands of years or longer. Naturally it is impossible to always say why there was an imbalance but it seems fairly obvious to me that a preponderance of CO2 in the atmosphere bodes ill for life on the planet.

So, we have a bathtub filling with CO2 from the spigot at a rate of X and emptying from the drain at a rate of Y. Human activity is both increasing X and decreasing Y albeit by a small percent of the total. Still, a 1% change at both ends is going to eventually result in the tub overflowing.

It is always going to be impossible to say for certain that the small human effect on CO2 is solely, partially, or not at all responsible for the corresponding rise in CO2 content in the atmosphere and there will be always be reasonable arguments that other forces are in play. It is also impossible to prove that CO2 amounts in greater quantities is solely or partially responsible for climate change.

That being the case I really don’t understand the argument that we shouldn’t make an attempt to stop our flow of CO2 into the atmosphere. I’m not suggesting that we immediately turn off the coal-fired powerplants or stop using the oil infrastructure that is currently in place. But, it seems wise to hedge the bets a little. If we can cut down on the various things we do that release CO2 into the atmosphere and it’s not catastrophically expensive, why not do it?

One important thing I’ve noticed is that we are, in fact, doing it. People are making purchases with a cleaner environment in mind. Large companies, huge companies, like Wal-Mart change their truck fleets to be green and this has a large impact on the problem. This is capitalism and free thought. In China, where much of the CO2 is produced, they are making huge strides in increased green technology.

Europe leads the world in development in solar and wind energy. The United States wind farms are massive and growing better everyday. I see little windmills all over St. Louis now. This is capitalism in action. There are companies out there trying new things because they realize that whomever comes up with clean and cheap energy solutions will make a ton of money! What is amazing is that these things are happening with relatively minor government interference. We still continue to give subsidies to the oil industry and tax breaks to people who purchase large vehicles for work. Yet, companies and individuals are lining up to purchase green technology. President Obama has initiated a green initiative which is, I suppose, fine as a counter to the oil initiatives but I’d just like to see government get completely out of the tax break business, oil, green, whatever.

The idea here is that government agencies are trying to steer technology towards an end or towards the company that pays for their campaigns. If we just let capitalism do its job then we’ll get a green world. Meanwhile, I see my friends, be they Libertarian, Democrat, Republican, non-voter, buying vegetables they think are healthy and light bulbs that last longer. Make a better product and you will succeed. And, it’s hard for me to imagine anyone who has worked with the filth that is oil, arguing that green energies are not objectively better. Currently more expensive, yes, but worse? In time, as technology continues to improve and buying habits continue to change, this problem will be solved.

Who knows, someone may come up with a way to scrub CO2 from the atmosphere.

Anyway, that’s my final take on it. We have largely recognized the problem and solutions are being attempted. It’s a complex issue, there are a number of solutions available, the practical ones are being used, the impractical investigated, technology explored. Why all the hate?

Tell me what you think in the comments and share away!