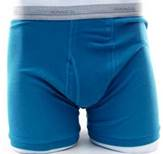 There’s a not so interesting story in the news today that brings up a much more interesting question about dress-codes.

Basically, a private pilot for the CEO of Abercrombie & Fitch claims he was fired in an age-discrimination case. That’s the boring part, not that the pilot shouldn’t have his day in court. What’s interesting is the behavior and dress-code stipulated by Abercrombie CEO Michael Jeffries for flight attendants is 40-pages long and states what sort of underwear that male attendants could wear, boxer-briefs only.

It’s an interesting question for me because I have no problem with dress-codes or even behavior codes for employees. If you work for a company then they should be allowed to decide how you appear as a representative of that business. When I contracted at Anheuser-Busch they strongly recommended having a beer with your dinner when out with clients and that beer should be company product. At Hooters or Fridays or just about any service industry there are uniform requirements. Many places even require that tattoos be covered.

But, underwear? This is something that should never been seen by anyone at work. I think I’d be a little put off if my company told me what sort of underwear I could wear. I completely understand the argument that if I don’t want to wear that particular sort of underwear I shouldn’t take the job. But, what if they told me I had to wear contact lenses instead of glasses? Or I had to dye my hair blonde? Is there a limit to what an employer can demand as far as personal appearance? Particularly if said requirement is not visible?

It’s not even what’s at question in the lawsuit so I’m not sure there is a point to my thoughts today. I’m just sort of curious what people think.