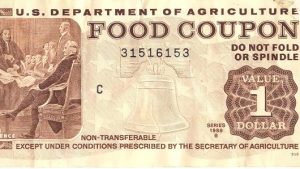 President Trump is apparently championing an effort to change the way food stamps are allocated to people in the United States who cannot afford to feed themselves and I wanted to examine this from a Libertarian point of view. The current program distributes food stamps which can be used to purchase a variety of products although there are limits on the type of food that is allowed to be bought. The proposal is to replace this system with ingredients which are then prepared by the recipient, in the style of Blue Apron.

I suspect the reason this proposal is being considered is the perception people who are getting food stamps use them on wasteful items like processed foods such as chips or on expensive items like steak, rather than using them for staple items. This perception is largely incorrect although not particularly relevant to my objections.

There is certainly a visceral appeal to the idea of providing simple ingredients using healthy options to the people who use food stamps. I also agree it is probably healthier for many of those who get food stamps. There are a number of problems with this plan although I’d like to focus on a single one. The plan assumes government knows better what foods people should eat than the individuals themselves.

While government might be right in some instances, it is a classic example of the arrogance of those who promote a beneficent and intrusive government. We know what is better for you than you do, just trust us to put the right things in the food and don’t worry about anything else, we’ll take care of you.

Now, there are other issues. It is certainly more expensive to contract this work out and where billions of dollars of government contracts are in play there is inevitable corruption. There is no doubt the companies who receive the bids to provide the food will end up skimping on ingredients and hurting some people. Still, with that said, my objections are purely Libertarian.

Government should not be the one to make decisions about what you eat. Even if you are poor, cannot afford to purchase your own food, and must rely on government help, that does not give a bureaucrat the right to make such decisions for you.

Personally, I think the existing restrictions on food stamps should be removed. If people want to purchase chips, candy, and steak with their government allotted stamps, that’s their choice. Certainly, it is a bad selection that has negative impact on the family in question, but it is their choice.

While this particular cause will most likely be championed by so-called conservatives, it is really extremely liberal. It is big government, just one with which conservatives happen to agree. This apparent paradox is quite consistent with what I observe about our current political divide. Principles mean nothing, it is simply a matter of what is expedient to whichever party you imagine is on your side.

When we cede power to government over the individual we slowly erode our freedom. Do you agree with government deciding on the food we eat? Even if it doesn’t affect you but simply the poor people who, for whatever reason, are dependent on government aid?