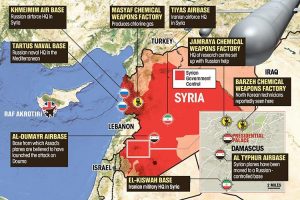 There is strong evidence Syria carried out chemical attacks against those arrayed in civil war against it. This happened shortly after President Trump announced the United States would likely be withdrawing troops from the region. The predictable result was renewed U.S. presence in the area with pledges of commitment for ongoing support. It is clear to me this plays into the plans of our foes. The question becomes, why?

I think it is vitally important to understand the President of Russia, Vladimir Putin, is intelligent, an excellent politician, a strong patriot, and incredibly well-versed in political intrigue. President Trump was making clear indications he wanted to withdraw the U.S. from the conflict in the region that involves not only Syria and the rebel factions but also Turkey, Iran, and the people known as Kurds who are vying for autonomy. The Syrian chemical attacked crossed well-established boundaries established by Trump. Not even a year ago we launched a largely ineffective bombing campaign after a previous incident of this nature.

It’s clear to me that Putin was well-aware of the effect the chemical attack would elicit. He wanted the U.S. to launch airstrikes and renew their presence in the region. He wanted to reignite the fire of interventionism on behalf of the U.S. and other western countries, who joined in on the assault.

I cannot know for certain why Putin wants this, but I can speculate and I hope the powers that be in the U.S. are doing so as well. If we simply react to Putin’s provocations in a predictable way, the final outcome cannot be favorable for the U.S. and, by extension, for me.

As a Libertarian I support Trump’s instincts to remove us from these conflicts all together. We have enflamed the region with hatred by our various interventions over the years dating back to orchestrating the toppling of the Iranian government back in 1953. The more the U.S. tries to look out for their interests in the region, the more those who live their hate us.

Our machinations in Yemen at the behest of Saudi Arabia are not helping us, they are simply creating new generations of young people dedicated to destroying the U.S. Our interventions in Syria are driving a wedge between the U.S. and NATO stalwart Turkey. Putin is actively trying to establish a stronger relationship with Turkey which, if successful, would do potentially irreparable harm to NATO, perhaps even cause the breakup of the organization.

Putin also has a vested interest in gaining the alliance of Muslims who make up a significant portion of the population of his country and the nations around it. The more we interfere in the region, the closer we drive these people to Russia and Putin.

Perhaps Putin is orchestrating these events for another reason beyond my current divinations. He is crafty and the Game of Thrones he is playing has enormous consequences for the world and the U.S.

What I don’t like is the dance we are performing like automatons to the tune of Putin’s violin. It seems to me, if we continue to cavort to his music the inevitable outcome cannot be healthy for this country.

In the world of fiction, Tywin Lannister falls while Jon Snow emerges victorious. This isn’t a novel.