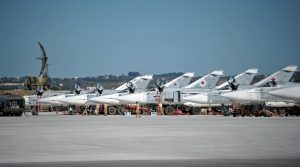 The images of the terrible chemical attack somehow managed to touch the sensibilities of those who were completely oblivious to the hundreds of thousands dead prior to that.

President Trump launched a supposedly devastating attack on the Shayrat Air Base which “severely degraded or destroyed” the base according to the United States military. So degraded and destroyed were they that Assad ordered and carried out raids from the base within 48 hours. According to sources not the United States, the military base was lightly damaged and, because the Syrians had warning of the impending attack, almost no planes were lost and there were few casualties. The majority of the Tomahawk missiles missed their targets.

Our political leaders told us there would be an immediate change in Syrian policy.

Why are we there? Why the drumbeat to war? Our interventionist policies have wrought nothing but horror throughout the Middle East, horror for the inhabitants of those countries, and horrors for innocents all over the world.

It’s nauseating to do nothing while terrible things are happening in this world. I get the urge to punish wrongdoers. I understand the rage at the inhumanity of Assad and his allies. I just don’t see anything good coming out of an intervention in Syria. Nothing.

If the action you’re taking isn’t going to do any good, aside from making you look like you’re doing something when you’re not, maybe you should think about not taking said action.