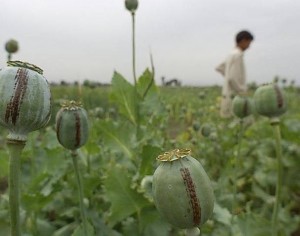 I read a lot of news stories trying to find things to blog about and I was perusing an article about how the United States government spent $3 million on seven rigid patrol boats that don’t look much different than the raft I floated down the river in while on vacation in Colorado. That’s $375,000 per boat. They were ordered to help patrol the rivers of Afghanistan. The boats are sitting unwanted and unused in a warehouse.

Near the end of the article they mention $10 billion spent on anti-narcotics and agriculture programs in Afghanistan since 2002. The idea being to curtail the growing of poppies which eventually are used to make heroin. Since 2002 the production of poppies in Afghanistan has tripled. $10 billion of your tax dollars spent on the War on Drugs in addition to the annual budget of the DEA which is $3 billion.

Furious about this waste, I started to do some research into where this $10 billion was spent. The first story I turned up was this one. Corruption in Afghanistan is high so we’ve created a court that is above corruption, well, sort of. Basically everyone who comes before it gets convicted. Of course only low level farmers who grow relatively small amounts come before this court. The big players never see the inside of the place. That sure endears us to the people of Afghanistan. It’s all nonsense of course. They take our money, throw lots of little fish in jail, and smile all the way to the bank.

The second article I found was a long and detailed one from 2009 report written by the Brookings Institute. It basically calls all efforts prior to a change of policy by the Obama administration in 2009 a complete and utter failure in which far more damage was than any good.

The report focuses on how to keep the money from drug sales away from those who plan and execute terrorist attacks. It details many of the difficulties involved in attempting to do just that and doesn’t paint a rosy picture. It tries to offer a real solution.

Of course our money isn’t being spent that way and of course no one seems to care.

No one is much interested in a real solution. We want lots of people thrown in prison. We want huge hauls of heroin that we can show-off to the public and claim our misguided plans are working. This is the country we live in today. People want a soundbite, a scapegoat, and a huge plate of french fries.

I don’t have a real point today. I’m just super-angry about $10 billion that was used not to alleviate a problem but actually exacerbate it. To make people all over Afghanistan hate me and want to kill me. Then there’s the $3 million on eight stupid little boats that are doing nothing.

When will this madness stop?

Do I see people getting angry enough to vote in Independents who don’t care about agendas and simply want to do what’s right? In a word, no.

But don’t worry, I’m not giving up! I’ll keep posting my blogs, I’ll keep writing my books, and I’ll keep voting for Independents.