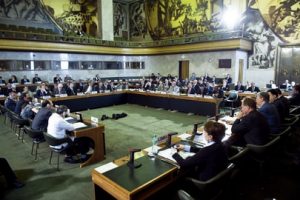 There’s an interesting little story in the news in that an organization known as the Conference on Disarmament is being led, for the next four weeks, by Syria. “… one of the darkest days in the history …” of the conference according to United States ambassador to the conference, Robert Wood. I’m less outraged.

Let’s face facts. The country that has the most arms and inflicts the most harm with those arms is the United States. Where’s your outrage about that, Ambassador Wood? The United States has military bases all over the world and we interfere in the affairs of other nations militarily far more than any other country in the world. We have troops fighting in Syria right now. Do they have troops in the United States?

Don’t get me wrong. Syria as a nation has no moral authority to lead any sort of Conference on Disarmament but what country should be in charge? Switzerland? Actually, they were in charge just before Syria. How exactly this conference determines which of the sixty-five nations that belong to it is the leader gives us an interesting insight into the entire farce. Basically, each of the nations that belongs gets to be in charge for twenty-eight days before turning leadership over to the next in line. The idea was that smaller nations were to have some say in matters instead of letting the large nations dictate policy.

Good plan. Well, it’s difficult to write sarcastically so let me speak more plainly: Really bad plan. If the leadership of an organization changes every twenty-eight days how difficult is it to not only legislate policy but simply to come up with a plan? Apparently not easy, the Conference on Disarmament hasn’t been able to make a single policy in ten years simply because it can’t come to an agreement. Don’t mistake what I’m saying. It’s not that they haven’t been able to implement policy, it’s that they have no policy at all. They do nothing and will continue to do same for the foreseeable future.

That’s why I’m not particularly outraged Syria is leading a useless organization. If the nations of the world had a real interest in limiting the proliferation of weapons we’d probably see some movement on that front. The problem is they only want to remove weapons that are advantageous for those they perceive as enemies. Our own very useful weapons? We’ll keep those.

The United States wants to denuclearize the Korean peninsula? Would that include all the weapons aboard submarines and ships that traverse those waterways? Hardly.

It’s an organization that does nothing and has almost no chance of doing anything. Early on it passed some treatise banning nuclear weapon proliferation, chemical weapons, and biological weapons. That hasn’t stopped anyone from pursuing these things or prevented said weapons from proliferating to any degree. Nations simply ignore it when it is in their interest to do so.

What’s the point? None that I see. I’ll save my outrage for the refereeing in the NBA finals, I’m sure there will be something to actually complain about.