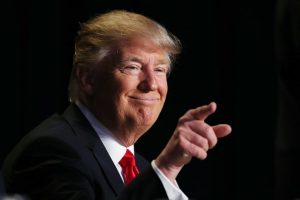 President Theodore Roosevelt was fond of what he called a West African saying, Speak Softly and Carry a Big Stick. It largely meant policies designed around negotiation, openness, forethought, and careful proclamations but backed by a willingness to fight if the people on the other side of the table are not willing to treat you with equal respect. President Trump seems to believe in the polar opposite of this strategy. He Tweets loudly, rudely, in all caps, with brazen threats, but when presented with real opposition backs down.

There are two important aspects to Roosevelt’s political philosophy and the Speaking Softly is a critical element of success. It is this idea I would like to examine today. If you’ve ever watched an action movie, we almost universally see the humble hero trying to avoid a fight and working towards reasonable solutions while the villain uses brute force, taunts, and bullying to get her or his way. The reason for this is obvious and a diametric visualization of the difference in styles between Roosevelt and President Trump.

The problem with President Trump’s abandoning the Speak Softly part of the equation is that it largely destroys the Big Stick. When you antagonize and attack anyone that opposes you, they have several options. They can back down before your threats, they can ignore your threats and carry on with their business, or they can become belligerent back at you with their own sticks.

The Tweet in all caps strategy ensures that more and more nations and domestic opponents of President Trump are going to test the big stick. There is no doubt the United States has the biggest stick on the playground; that being said, the more you use the stick the better chance there is that it will break. You don’t want to resort to such unless it becomes absolutely necessary. President Trump relishes in threatening to use the stick. Whether he carries through with the threat or not; the stick inevitably becomes smaller and weaker.

Another problem occurs when your stick isn’t nearly as big as you think it is. President Trump doesn’t have many, if any, good options in dealing with North Korea. His bluster simply emboldens them to do things like shoot ballistic missiles over Japan. This is everything except a declaration of war. Trump promised the stick if North Korea continued firing missiles and not only did they do so, but they did it in a much more dangerous fashion, actually crossing over the territories of Japan. Imagine if Russia fired a nuclear capable ballistic missile that crossed over part of the United States!

Another problem arises from the fact that Japan, and other allies, begin to see us as impotent. Japan has the ability to become a nuclear nation with an aggressive military. The fact that they should take such steps is something they must consider seriously at this point. If we can’t be counted on to protect them, they must do it themselves. Some might argue that as a good thing but there is a history of Japan as a military state that you might want to consider.

Turkey is currently angry at us over the arming of Kurds in the attack against ISIS in Syria. Without the Incirlik Air Base our options in the region become severely limited. Russia is currently courting Turkey in hopes of strengthening relations.

I don’t want to get too far afield from the point I’m trying to make here. To summarize; the Big Stick part of the equation doesn’t work nearly as well if you are unwilling to Speak Softly. President Trump appears to be incapable of Speaking Softly. It’s all bluster and threats. This has dangerous repercussions. Either he is forced to use the Big Stick far too often or he backs down from the inevitable challenges.

In either case it cannot possibly be a foreign policy that will result in safety and security for the citizens of the United States or the world.