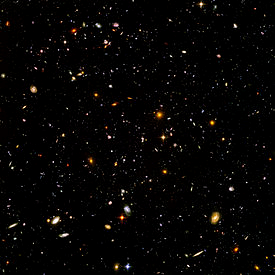 NASA released another deep field image of the night sky and it makes me ponder the difference between the religious view of an image like this and the scientific view. The picture shows a small section of the night sky, smaller than the size of the moon, and over five thousand galaxies. Each galaxy has potentially billions of stars although they vary greatly in size.

My thinking today is about how a deeply religious person looks at this compared to the way I look at this and all the middle ground in between. When I see this picture, I see such vastness that it confirms my atheism. No one entity could simply create this amount of material at the snap of a finger or wave of a noodly appendage. I like to think of a field of grass and all the geology, biology, chemistry, and other elements involved in it. To engineer such a thing would be a massive undertaking. Then to extend that to an entire planet, solar system, galaxy, and billions of galaxies that make up the universe. This is beyond any one creator no matter how powerful.

I can’t speak for religious thinking with any certainty but having spoken with religious people over the years they would likely take the opposite view. That such magnificence can’t be some coincidence. They would see a guiding hand that imagined, designed, and created this beauty.

I’m not really trying to come to any conclusions today just thinking about things. The way our minds shape our view of the world around us. Two people can look at exactly the same thing and come to very different conclusions. I’m of the opinion that my brain is somehow, certainly not fundamentally, different from a religious person’s brain. We see the world and interact with the world in different ways.

For me it’s not a matter of choosing to believe or not believe in god, it’s that I don’t, and I never will. I’ve been told that someday I’ll “see the light” and become profoundly religious. Honestly, I can’t imagine that ever happening. It requires a faith that my brain doesn’t understand. I see that picture and the thought that one creator entity made it all, every hydrogen atom, every chemical reaction, and I laugh. It’s impossible.

My religious friends might say that people thought flying was impossible but we do it now. It’s a bad argument because we’ve seen birds and insects fly from long before we could, but the concept is relatively sound. Things that seem impossible yesterday are completely possible today.

I just wonder if there is some genetic predisposition to religious thinking. Some gene-code sequence that makes a person more likely to be a faith-based thinker. I have no answers.

When I speak with most of atheist friends we all generally agree that there is something different going on. I’ll give one example and then call it a blog.

There are things in the bible, torah, quran that are ridiculous concepts. Noah’s Arc for example. It’s not physically possible to get that many animals and that much food in such a small space for a year. Anyway, I mentioned to my friend that at some point a religious person has to look at something like this, admit it’s ridiculous, and then say ‘I believe it anyway’. At some level of their thinking they have to do this. My atheist friend replies, “How do they do that?”

I have no answer. I don’t understand how you could look at something that is clearly false and choose to believe it anyway. I do think there are people more in the middle who don’t believe the bible, torah, quran tells literally true stories but they do believe in a higher power, noodly or not.

I find it interesting. What do you think?