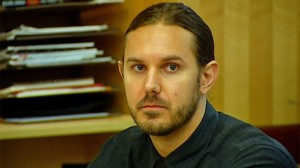 There’s apparently been a big story roiling the Christian Rock world for the last year or so although until I spotted a headline I was completely unaware of the turmoil. It seems the death-metal band As I Lay Dying’s lead singer, Tim Lambesis, was arrested for trying to hire someone to kill his estranged wife. Happily the person he tried to hire was an undercover police officer.

The arrest and accusation apparently sent deep shock waves through the Christian Rock community. Now Lambesis is saying that he actually was no longer a Christian but had forsaken his religion for Atheism.

So why am I talking about this? Because I’m an Atheist and in reading the comments about the story I found what I think is a common theme among many Atheists and Christians. The Christians were all blaming his Atheism for his “turn” in behavior while the Atheists were all blaming his Christian underpinnings. I see this quite a bit in the Atheist community and the religious community. Both sides blaming a person’s religion or lack thereof for that person’s lack of ethics and criminal behavior.

An Atheist will argue that religious fervor has been responsible for an incredible amount of violence throughout the history of the world. A religious person will argue that an Atheist has no moral compass at all because there is not the carrot of heaven or the stick of hell to keep them ethical.

I have a different take.

Some people are without morals or ethics. Some people will hire someone to kill their estranged wife because they lack the ability to control their emotions. It has nothing to do with their religious beliefs. There are wonderful religious people in the world who are kind, caring, considerate, and would never hire anyone to kill their spouse no matter the provocation. Many Atheists fit that profile exactly as well.

We are quick to lump people into classifications these days. Christian? You must hate homosexuals. Atheist? You must hate Christians. I drive a Prius. On at least a dozen occasions since I’ve been driving my 2006 Prius I’ve parked near a large vehicle as the owner of said vehicle was emerging or going into it. They’ve rather sheepishly asked me if I hate them. I don’t. I think people should drive the car they want to drive but that’s not the point I’m trying to make.

It’s this general lumping of people together that gets us into a lot of trouble in life. The car a person drives, the religion or non-religion a person practices, the suit he wears, the beard on his face, the tattoos on his body; where he lives, who he votes for; these things mean nothing. What is important are a person’s actions. Is he kind to his wife? Does she help co-workers when they ask her? Does she help her friends when they need something? Does he call his mother when she’s not feeling well? (Get better soon, mom).

Lambesis, murderous scum. Why? Because he tried to hire someone to kill his wife. That’s all I need to know.