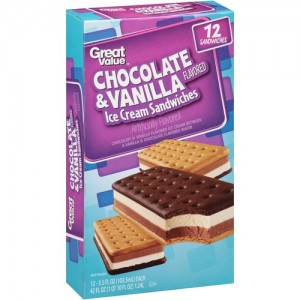 I have an ice cream sandwich problem. I’ve written about it before and it’s haunted me since childhood. I’m a little less tempted now. It turns out the ingredients in some ice cream sandwiches make them resistant to the power of the sun, in other words, they don’t melt.

Technically, according to the article, they do melt, they just don’t lose their solid shape. This does make even an addict like myself begin to wonder what I’m putting into my body when I purchase those delightful treats and down them without hesitation. I will admit that I generally purchase a higher-class of ice cream sandwich simply because I’ve reached the point in my life where I prefer something tasty and more expensive over something cheap but rather icky.

I’ve never had the Great Value sandwiches from Walmart so I can’t speak to their flavor but I have enjoyed Klondike Bars which apparently have many of the same ingredients and are somewhat, although not completely, resistant to melting as well.

I think everyone tries to eat at least a little healthier to some degree or the other and the people of the United States spend a great deal of money on diet products. This indicates a desire to eat better food. The problem is that providing certain kinds of healthy food without particular ingredients is not so easy.

However, I’m willing to bet that the media storm surrounding the Great Value Ice Cream Sandwiches will put a fairly big dent in the sales of the product. That Walmart will probably have to change the ingredients and perhaps even re-brand the product. What’s interesting is that the ice cream sandwiches were not hurting anyone. The ingredients have been tested by the FDA and approved for use in food. Such ingredients are tested fairly thoroughly and if they were toxic would be banned. So what we have is the sandwiches being judged in court of public opinion. I’m all for this. The more information people have about anything the better decision they are going to make.

It’s interesting because I came out with an article not long ago about how Monsanto is helping to feed the world safely using genetically modified food (GMF). There’s a significant body of evidence that they don’t do any harm, can be grown more easily in pest-heavy and environmentally unfriendly regions, increase yields, and can provide more nutrition than their counterparts. Those opposed to such products are vehement in their opinion despite the facts. Those that will boycott the Great Value Ice Cream Sandwiches will likely be just as vehement.

The question I ask myself is how do I reconcile my rather immediate distaste at reading the article about the ice cream sandwiches with my complete lack of concern with GMF?

I guess it just that I’m comfortable with the idea of eating GMF because I’m aware of the amazing good they do in helping prevent starvation world-wide. If I want to eat a delicious ice cream sandwich without churning my own ice cream and baking my own sandwich material then I’m forced to put up with some chemicals in my food. There is a price to pay for the conveniences of modern society and the fact of the eight-billion people that inhabit our world.

In the end it’s best to avoid processed food as much as possible but it’s not so easy … especially when you have a problem.