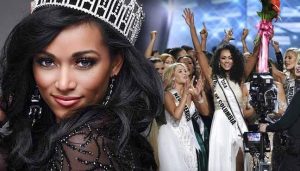 A nuclear scientist by the name of Kara McCullough is in the news because of the answer she gave to a question about feminism while on her way to winning the Miss USA pageant. I think her answer, and the ensuing uproar, gives us interesting insight into what it is to be rationally moderate in this world. We are the majority but feel vastly outnumbered.

McCullough was asked if she considered herself a feminist. She answered that she preferred to use the term equalist. She went on to add she doesn’t consider herself one of those die-hards. By this she meant radicals who have made inflammatory statements.

She was immediately attacked on Social Media as mischaracterizing feminism as a man-hating movement. These attacks largely came from individuals who identify as left-wing.

The reaction to the reaction was swift, thanks Internet! Those on the opposite side of the spectrum quickly tried to associate every democrat, liberal, or feminist, as being part of the small group that was criticizing McCullough. And here we see the problem.

McCullough doesn’t want to associate herself with what are called radical feminists who have made any number of man-hating comments. And rightly so. This small group of people have hijacked the word feminism and given it a terrible connotation. Of course, the vast majority of feminists are more in line with McCullough. They want equality, they don’t see men as an obstacle or an enemy.

Meanwhile, the vast majority of people who are now attacking those making nasty comments about McCullough are actually pretty much equalist as well. They don’t think women are chattel to be owned. They don’t imagine that women are incapable of being lawyers, doctors, soldiers, or anything else.

If only those two groups could somehow be made to realize they are basically on the same side. We make up the majority. We outnumber the few man-haters and misogynists by enormous numbers.

Yet the vocal few taint the image of all the rest. Those screaming and yelling and refusing any compromise paint an entire group with the red brush of hate. They benefit from the duality of left and right. They profit because the majority are centrists, equalists. By splitting those in the center toward their wing, they bolster their numbers and impact.

Every time I read an article, I scroll down to the comments section. There is always someone making a moderate and rational point about the story in question. Every time this is immediately drowned out by the roar of the few. This roar gives the impression of many. It lures moderates into one camp or the other by portraying enemies as irrational, angry, and violent.

The opposite is true. If only we knew it, the vast majority of people would find they largely agree on issues.

I absolutely believe most people in this world are equalists, like McCullough. Yet the few who are not seem to drive a wedge between the nuanced many. Yes, people who are equalists differ in certain small factors of that equality.

The problem is that we get nowhere by yelling at each other, by refusing to compromise on minor points. And yet we seem to go further down this path every day, driven by those who gain from strife and rage. Those few.