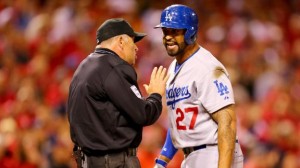 Anyone who reads my blog on a regular basis knows I’m a St. Louis Cardinals fan. It’s a good day to be such again but that’s not really my topic now. I want to talk about reality versus perception. On Monday night I was at Game Three of the Divisional Championship Series against the Dodgers and there was a great deal of controversy over the strike zone by umpire Dale Scott.

The Dodgers were particular upset by the variance in the strike zone and both player Matt Kemp and manager Don Mattingly made their annoyance public. The former after he struck out in the ninth and the latter after the game. There was an undercurrent that the Cardinals benefited from fewer bad calls than the Dodgers.

In the stands it was clear Scott was calling pitches high and to the right side of the plate strikes for most of the night. My perception, from the upper deck but fairly close to behind home plate, was that from the first inning on pitches in that area that were being called strikes. The other side of the plate seemed to be significantly less loose. Overall, pitches that looked like they might be balls were called as strikes and in general it was a loose strike zone. A pitcher’s strike zone.

As the game went on there wasn’t much scoring as is often the case when the umpire is calling a wide strike zone. It seemed to me, from my obviously biased perspective, that the umpire was generally consistent although there were some balls getting called as strikes on the left side of the plate that were balls other times. But that the right side of the plate was consistently a strike, particularly high in the strike zone.

I’m much further away from the plate than the players. The players obviously have a bias as well as us fans.

Reading comments on the stories it seems the general thread was that the umpire was bad but it sort of depended on if you were a Cardinals fan or a Dodgers fan if you thought the calls were lopsided for one team or the other. Most Cardinals fans seemed to think it was pretty even while Dodger fans agreed that the Cardinals were given an advantage.

That’s the bias. The perception of the viewer interfering with reality. The only way to avoid such bias is to seek out factual evidence. Happily enough, in today’s modern world, there is a tracking system which monitors every pitch and spits out statistics. Here is the analysis of Game Three.

These two facts lined up with what I thought I saw during the game.

On the particular call that Kemp argued about in the ninth inning he was called out on a pitch that earlier in the count was called a ball. It was in the zone that Umpire Scott had been calling a strike for most of the night. It can be argued that the first pitch, called a ball, was against the umpire’s trend on that side of the plate and when the second came and Kemp simply watched it go by he was tempting fate. Still, he has a point. The pitches were virtually identical.

What I find interesting is the ability to dispel general perception with factual evidence. No longer is perception reality. We can get the reality quickly and easily. It’s not surprising that fans and players end up thinking that they were treated unfairly when the reality is somewhat different. What I really love is this age in which we live. Where arguments like this can be settled with factual evidence instead of endless hours of arguing and no real resolution. That’s cool.

And, of course, Go Cards!