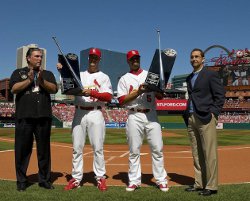 2 thoughts on “Jack Clark Accuses Albert Pujols of Steroid Use”