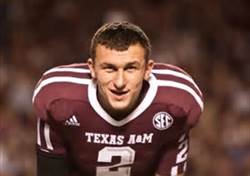 3 thoughts on “Johnny Manziel and the Autograph Scandal”