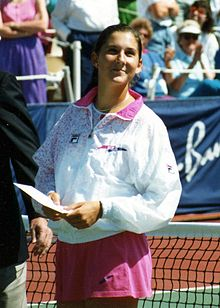 A terrible anniversary passed by on April 30. If not for an article buried fairly deeply in the tennis section of ESPN I would have forgotten about it altogether. Twenty years ago on that day an obsessed fan dashed onto the tennis court in Hamburg, Germany and stabbed tennis great Monica Seles in the back. The wound was serious both physically and emotionally and Seles did not return to competitive tennis for over two years.

Fans of tennis were cheated out of many years watching her play to say nothing of the emotional damage done to Seles herself. Today I don’t want to spend too much time condemning the attack or wistfully imagining what might have been. The stabbing was horrible. The change of career trajectory to Seles a crime. These are true statements and I think no one will disagree. What I do want to discuss is the truly remarkable dearth of such attacks.

Sports fans are fanatical. Their willingness to attack one another inside and outside sports venues is well-known. Here in my home town of St. Louis it’s a rare Cubs or Blackhawks game that doesn’t result in at least a few punches. Red Sox and Yankee fans, Giants and Dodgers, Wolverines and Buckeyes, Crimson Tide and Tigers, these are fierce rivalries where trees are poisoned and fans are beaten. Despite this fever pitch of animosity there are rarely attacks on players. It’s as if some unspoken rule of sportsmanship prevents it.

Not only are players vulnerable at games but also in their daily lives where they interact with the public. A crazed fan could fairly easily attack the star player for a rival squad and yet it almost never happens. Why is that? What is the reason behind this restraint?

I can’t answer the question with any certainty but I can at least make a suggestion. Too often sport are associated with war. We go to war with the other team. We battle on the field of play. We fight for victory. Yet the reality is that sports is nothing like war. We play by rules, sometimes we push them, but we generally follow them. We don’t try to hurt our opponents, let alone kill them.

I hate the Cubs. There was a time in my youth when my hatred of the New York Mets was almost unquantifiable. Don Denkinger, I don’t like him. While it might cross my mind to harm those who dare play for the other team I know that such an action would be unsporting. If my team loses on the field because the other team did better, damn you Roy Oswalt, then I must accept it and wait for next year.

You might argue that I’m a rational fellow and there are plenty of people not as sane. I agree! That’s why I find the lack of physical attacks on opposing players to be so compelling. If crazy people, really crazy people, realize that it’s wrong to attack players for an opposing team; then sport must be doing something right. There is something in the fierce competition that brings morality, ethics. We root for our team, if they fail to win then we put away our disappointment and start getting ready for next year. Those most drunk amongst us may fight one another, but the players, they are off-limits.

This is a glorious thing. This is how life should be in all its aspects. We do our best. Our rival does the same. We play by the rules and, win or lose, come back next year to give it our best again. We weep in defeat but firm our resolve. This is society at its best. This is a nation at its best.

Maybe I’m a hopeless romantic, but I do love me some sports. Let’s Go Blues!