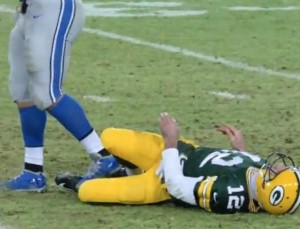 This past weekend in the NFL I saw my downtrodden St. Louis Rams end yet another losing season but I also witnessed one of the most despicable acts in sports that I’ve seen in many a year. There is some controversy over the play in question but I have no doubts.

Before I go on, I’d like to say that I’m no Cheesehead. The Lions are, like my Rams, the ugly step-child of the NFL. I watch as year after year the favored sons (Green Bay, Pittsburgh, and New England) have every marginal call go their way. It’s infuriating as Rodgers gets away with rule-breaking that is called on whoever is quarterbacking the Rams. That being said I have a huge problem with what Suh did in the game.

Rodgers hurt his leg early in the game but returned to play. I may hate him for getting all the calls but there is no denying his toughness and talent. In the incident in question Suh stepped on Rodger’s hurt leg twice. At first glance of the replay it looks like it could easily have been accidental, it wasn’t. If you watch the incident closely you see that Suh only managed a glancing shot the first time and came back for more. The second time he paused, lifted his other foot, and pushed down with all his weight on Rodger’s calf. Rodger’s swats at Suh who then walks off apparently not realizing what has happened. Ha.

Here’s what happened and why I think it’s so horrible. Suh knew that Rodgers was injured. He knew that there would be an opportunity to hit the injured leg and he made his plans. When that opportunity arose he stepped backwards with cool and calculated nonchalance. He missed and took another crack at it. Then he pretended nothing happened and walked off feigning ignorance to the event. That is calculation, that is malice, that is intent to injure.

The natural reaction when accidentally stepping on an opponent is to immediately put the opposite foot on the ground and take weight off the standing foot. I played rugby, I was stepped on and stepped on others. When stepping that obviously on an opponent you know it. Suh knew it. There is no way he didn’t realize it but he pretended he didn’t. That’s a dead giveaway. Had he turned and feigned an apology I would have some doubt about if it was intentional or not. He didn’t do anything of the sort. He wanted to hurt Rodgers and he wanted to pretend it was unintentional.

Last week a teammate of Suh stomped an opponent in a fit of anger. I have no sympathy for Dominic Raiola but I at least understand rage. I’ve been angry and I’ve wanted to stomp an opponent for a moment before reason prevailed. But to plan, wait, and execute an attack like that with such cool disregard for another man’s livelihood? Disgusting.

Professional football is a tough game. I remember Stephen Jackson breaking his thumb and talking about how players on opposing teams squeezed it in pileups. I have a problem with that just as I have a problem with Suh. On the other hand, there’s nothing wrong with attacking an injured player’s weakness within the game. If Rodgers is having trouble running then adjust your pass rush to force him from the pocket. If you tennis opponent has a weak backhand, hit it to their backhand over and over and over again.

Suh has been suspended for one game for his actions which is the playoff game next week. Personally I think he got off too easily. There are plenty of opportunities to hit an opponent legally in the NFL. I don’t have a problem with players who go at it hard and to the phantom of the whistle. That’s the game. I cannot and will not excuse such a calculated and cool attack.