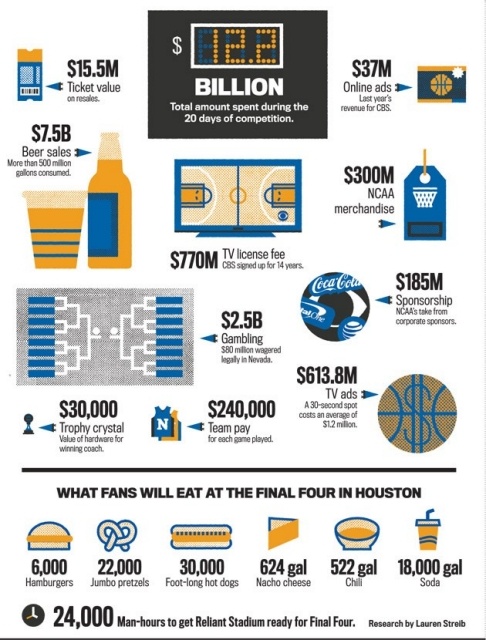 The true nature of the NCAA was on full display when the president of that organization agreed that certain rules about food were “absurd”.

When I read through the comments on stories like the one above, I find there are many people honestly misinformed. Here are some of the most basic misconceptions.

The scholarship entitles the student-athlete to a free college experience including books, classes, food, room, and travel to games.

An athletic scholarship is based on a certain formula and the average Division I scholarship student-athlete pays $2,951 to attend the school.

The student-athlete receives a four-year scholarship.

Four year scholarships ended in 1973 and all athletic scholarships are for one year. When a student-athlete is injured or sees a performance drop such that they will not be able to compete for the team, they are generally not offered a scholarship for the subsequent year. This is waived if the injury appears to be short-term in nature and the student-athlete will recover to be able to contribute the following season.

A four-year education is worth millions of dollars.

Tuition inflation means that most students do not pay anywhere near the full tuition to attend a university. As an example, my niece attends Case Western University which has a stated total annual expense of $60,129 of which $42,766 is tuition. The reality is that almost 98% of the students receive financial aid that cut costs more than in half. The stated cost of an education in this country is far higher than its real cost.

What I really want to talk about today is why the NCAA has a rule about whether putting cream cheese on a bagel constitutes a meal. Yes, that’s the rule that the original article is about.

The NCAA argues that they are defending the integrity of the sport by preventing schools from “bidding” on a student athlete’s service. That if the field is anything other than exactly equal those schools with a larger a financial base will get the best players to the detriment of the sport in general.

Thus they have a massive rule book filled with things that define how much food a school is allowed to provide to a student. A school is allowed to feed them three times a day and student-athletes are forbidden to remove any food from the cafeteria to be eaten at a later time (another misconception). Students are allowed to be given snacks although the amount of food is strictly regulated to prevent rule-breakers from sneaking food to the kids.

These kids are young, growing men spending a great part of their day in vigorous physical exercise. I was once a young man who spent hours a day practicing and playing sports. I was hungry constantly. From the time I arrived home from school until I went to bed I was basically eating. I’m 5′ 7″ and weighed 130 at the time (not anymore).

My point is that the NCAA’s stated goal of keeping one school from having a competitive advantage over another school is merely a smokescreen. The reality is that college football and basketball generates huge amounts of revenue from sources that will be a surprise to many of my readers.

Texas A&M auctioned off replica helmets signed by Johnny Manziel and other team stars for $15K each. Johnny Manziel, unlike every other non-student-athlete, is not allowed to sell his signature.

Schools auction off seats at their various alumni dinners for thousands of dollars. The more someone pays the better table they get with the star athletes sitting with them.

Athletic apparel companies give millions to the schools which “redistribute” it to the coaches. This new strategy came into being in 2010 when the nature of Shoe Contracts became public. The athletic companies used to give the money directly to the coaches but the rank hypocrisy turned people off.

Coaches get paid in exclusive country club memberships, “Ask the Coach” media contracts, and a plethora of other non-salary revenue. The President of the NCAA is paid well over seven figures. The entire organization is tax-exempt.

A lot of people benefit from the way the NCAA currently operates from the fans, to the construction companies building stadium, to politicians sitting for free in luxury boxes, to NCAA employees jetting around the country on private jets provided by the wealthy who want access to the glory of the athletes, to the seven-figure salaried announcers, to the fans who enjoy the game, and to the players who get to go to school.

All I’m asking for is a little equity between all those interested parties.

I don’t begrudge the networks their advertising revenue, the construction companies their profits, the coaches, athletic directors, sideline reporters, and countless others their salaries.

The current system strikes me as grossly unfair to the student-athletes who are the underpinnings upon which all other profits are based. It’s strikes me as anti-American. It hits me in my Libertarian guts.

The value of a NCAA Division I football and basketball player has increased by an almost astronomical amount in the last twenty years and their remuneration remains unchanged.

One thought on “Not Enough to Eat for Scholarship Athletes”