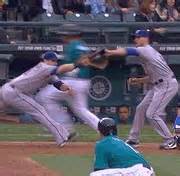 We want to get the call right and we want people to play with integrity. We say these things but do we mean them? In a Major League Baseball game between Seattle and Texas on Friday night, getting the call right and sportsmanship became an issue. You can watch the video of the missed call here but I’ll cover the basics.

On a ground ball with a runner on first the lead runner was forced out but on the return throw the pitcher intercepted the ball before it reached the first baseman. The umpire missed this, more on that later, and called the runner out.

Columnist Mark Townsend of Big League Stew calls it the worst call of the season. While I agree that the call was a mistake I actually don’t think it was a bad call from the umpire. On ground balls the umpire is generally listening for the sound of the ball hitting the glove as he watches the feet of both the base runner and the first basemen. It’s completely understandable how the umpire missed the call. If you read further down in the article you’ll find that the Seattle manager actually missed it as well and was arguing that the first basemen left the bag early, not that he didn’t catch the ball at all.

Now a missed call in a baseball game is not really worthy of an entire blog, unless we’re talking about the 1985 World Series and Don Denkinger, and what I want to discuss today is the culpability of the players in this mistake. I can’t stress this enough, we don’t want mistakes. We want the right call every time which results in the proper team winning the game. That is justice.

I’m of the opinion that one important thing happened that should not have occurred. I lay a great deal of the blame on our win-at-all-cost society. We teach these sorts of values rather than sportsmanship. There were two players on the field at the time of the incident who could have easily told the umpire that the first baseman did not catch the ball and that the runner was safe. First baseman Mitch Moreland and pitcher Justin Grimm. They chose not to do so. They chose to walk to the pitcher’s mound concealing the fact that the first baseman did not have the ball.

One can argue that it’s not their fault that the umpire made a mistake and it’s not their responsibility to point it out. I argue differently. The reason I do so is because  the direction our society is heading based on the win-first mentality. I’ve got nothing against winning. The goal is to give your best performance every time out. I’m not even going to call Moreland and Grimm cheaters for concealing the reality of the event from the umpire but I don’t like what they did. I don’t think it’s an example they want to set for their children, if they have any.

I’m probably over-reacting but it really seemed like if Grimm turned to the umpire, smiled, and showed him the ball we’d all be a little better. Our lives are built, our world is made one decision at a time. I vote for integrity and honesty. That’s the world I want to live in.

Tom Liberman
Sword and Sorcery fantasy with a Libertarian Twist
Current Release: The Sword of Water ($2.99 for 300+ pages of ripping good fun)
Next Release: The Spear of the Hunt

2 thoughts on “The Double Play that Wasn’t”