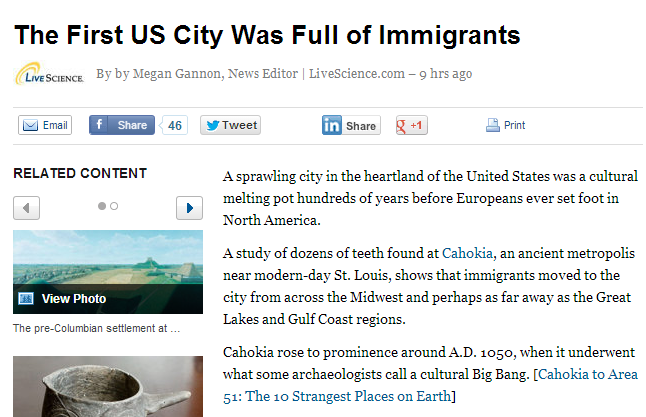 I read a lot of news stories looking for things to write about and this week’s most incredibly stupid headline comes from LiveScience. This is a bit of an upset. Usually the financial markets or one of the yellow journalism rags win out, but when I saw this one I knew I had a winner.

The First U.S. City was a Melting Pot – Blares the headline.

I thought to myself, perhaps they are talking about the early years in New York or Boston, but, no, it’s about a place called Cahokia which is about a half-hour’s drive from my house. It’s a cool site where a large and thriving metropolis of perhaps 20,000 people lived about a thousand years ago.

Anyone interested in the history of the region should visit the Cahokia Mounds website or better yet, come to St. Louis and spend your tourist dollars!

One thing it wasn’t was a United States city. You, see the United States didn’t formally exist before at least 1776 when we declared independence from Britain. Although it can be argued that the country didn’t truly exist as a national entity until the Constitution was ratified in 1798. Either way the headline is utter nonsense.

It’s an interesting article about how various cultures came together at Cahokia and built what was at the time a massive city.

Read the article! Visit the website! Come to St. Louis!