What do I see as Good Christian behavior? Selfish, angry, violent, intolerant, murderous, money-worshipping, self-righteous, arrogant, bereft of personal responsibility. These are the words the immediately leap to my mind. Now, I’m an Atheist so feel free to look at your disgusting religion through rose-colored glasses and ignore me. I’m telling you what I see.

I recognize there are many people, some my friends, who claim the Christian faith and are not these things, but those who think of themselves this way are the outliers. I’ve had many conversations with Christians who don’t agree with mainstream doctrine in regards to transgenders, Muslims, homosexuals, atheist, Democrats; yet you support the leaders that make statements against these people. Good Christians are you, and I see your vile behavior every day in media outlets of all kinds.

That’s not me, you say, I’m a good person. Yet, you sat in your churches day after day listening to the hatred and did nothing. It’s not that you are losing your religion, it’s lost. You sat in silence while it descended into hate fueled, fact ignoring, cruelty and outright evil. You did nothing and now it’s gone. So, don’t tell me you’re a decent human being, you are part and parcel of it all, don’t fool yourself.

Now you try and post kind, helpful things on your Social Media outlets in an effort to pretend you are not part of the disgusting, murderous, cult that, on those infrequent occasions you actually consult your morality, sickens your stomach. You are the problem; you are a Good Christian.

Good Christians are willing to sacrifice anyone who disagrees with their doctrine, they do not care, they do not help, they are invested in hurting anyone and everyone who they see as a threat. Good Christians fund this hate-machine that spews its bile on everything decent and kind.

A Good Christian really isn’t about religion anymore. They are a social movement, a political movement, a monolithic assault on freedom, which is a subject I take quite seriously.

Don’t fool yourself, you are a Good Christian and that’s not anything to brag about. 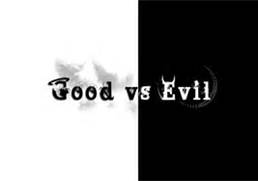 I wrote a series of posts in March of 2012 about stupid platitudes and one of them passingly referenced prayer. The post wasn’t really about prayer at all but about the stupid platitude. Nevertheless I did suggest that prayer was rather silly. I went further into that concept in another post much later.

In any case, a reader stumbled upon the platitude post and began a dialog with me expounding on why I was wrong about prayer. I replied and so on. Eventually the person began to wander far afield from the original premise and posted the following:

… if you personally know that there is no God, what do you believe about things like little girls in the Congo being raped to death? Is that bad? If so, why? Who decided it was bad? I believe rape and murder are EVIL and horrific, and my worldview has an explanation for the concept of evil. A gap in the godless explanation of the universe is that there I have found no convincing evidence as to why we should view anything as bad or good.

I read this to mean that in a world without god there is no differentiating between raping and murdering little girls and serving them tea and cookies. I was physically upset by this argument. My stomach churned, I felt like vomiting. That the lack of belief in god meant lack of belief in evil, or good for that matter. Not even just the belief of evil but that evil and good do not exist without god.

I was so horrified, so outraged, that I decided to wait a few days before posting anything.

“Who decided it was bad?” How about every single human culture that has ever existed, regardless of their religious view. Long before you, long before Jesus, long before the Jews, people knew it was bad.

Rape, by the way, is mentioned in a number of place in the bible. My favorite is Deuteronomy 22:28-29 in which the rapists is punished by having to give the father of the rape victim fifty bucks and has to marry the woman he just raped.

After I settled down I began to wonder if the person commenting actually had a christian view of evil or if they were misinterpreting the concept. I did some research.

I went around and read articles about evil and articles about divine law. From everything that I can find, the christian view of evil is not that god defines it. There are broad parameters of wrong but by in large god decided to allow evil to exist because otherwise people would not know good. Nowhere could I find a clear definition. In a number of places christians try to explain why in the old testament god orders his people to murder, to rape, to enslave their enemies but in no place is evil defined. Rape is largely explained as wrong because it is fornication, sex outside of wedlock, not because you are forcing yourself on a woman who doesn’t want to have sex with you.

There are many restrictions in the bible, in particular the Book of Leviticus; adultery, eating four-legged insects (used to be birds but got changed on reinterpretation), offering grain without yeast, eating blood or fat, giving birth to a boy, skin disease, moldy clothes, well I could go on and on. The point is evil is not defined. Behavior, certainly. Evil simply exists.

So, in the end I can’t get too upset. Either the person making the comment didn’t explain what she meant very well or she is confused as to the biblical interpretation of evil.

The concept is interesting though because I’m often asked by religious people when they find out I’m an atheist, “Why are you good? What keeps you from doing bad things?”

The answer of course is everything Rand. I do good because it’s in my best interest to do good. If I raped little girls I’d be thrown into prison, murdered by outraged parents, beaten to a pulp by brothers and friends.

Even if I was a soldier, invading an enemy land, and could rape a girl without consequence I would not do it because I respect her as a human being, I respect myself as a human being. Because I know if someone raped one of my sisters I’d want to kill that person. As would anyone, regardless of their religious beliefs, since the beginning of humanity.

Why do I think rape is evil? Because I decided it is.

Tom Liberman
Sword and Sorcery fantasy with a Libertarian Twist
Current Release: The Sword of Water ($2.99 is a bargain for 300+ pages of great reading)
Next Release: The Spear of the Hunt