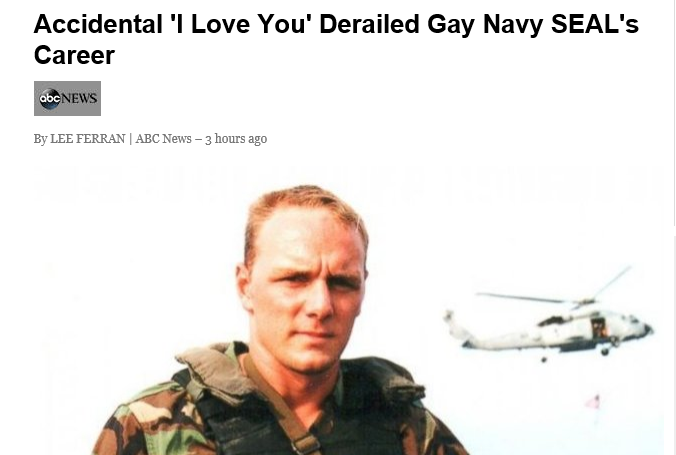 This week’s misleading or stupid headline is a double-header! The teaser from Yahoo is really misleading and the headline itself doubles down on the idiocy.

The story itself is about a U.S. Navy Seal who, eleven years ago, was found to be serving while a homosexual. At the time this was against the rules and he faced discharged.

Yahoo runs a scroll in which stories are teased. Here is that image:

This clearly seems to indicate that American hero Brett Jones was discharged from the Navy over his sexual persuasion. That when they found out he was gay they discharged him. This isn’t true but I’m getting there.

Once you click the scroll you get to the image I have at the top of the story.

This again seems to indicate that Jones had his career ended when it was determined he was a homosexual.

Now as to why the headlines are so misleading. When I read the article I found at that yes, there was an investigation after Jones said “I Love You” on a recorded message to his significant other and this was overheard by a secretary who then reported it.

The result of the investigation? Humiliation in having his security clearance revoked certainly but a discharge? No. The case was dropped and Jones eventually took Honorable Discharge in 2003. Perhaps he took it earlier than he would have but that is speculation. In talking about the experience Jones makes it clear that his Brothers-in-Arms were almost completely supportive. He thanks them for their acceptance.

This fact makes me, if possible, even prouder of the men and women who serve our country and of those in the Navy SEALs even at a time when being gay was not allowed. The fact that they openly accepted him is an incredible example of everything about which I try to write in my novels. What we do is the important thing and nowhere is this more important than on hazardous combat missions.

Brandon Webb, editor of a Special Operations Veteran website, said it very nicely when asked for his opinion on Jones.

The people with whom I’ve worked in the Special Operations community are more concerned with an individual’s contribution to the team, and their ability to do their job exceptionally well, than their race or sexual preferences …,

Would that everyone thought this way.

Jones, by the way, is doing well in civilian life with a husband and son.

The story is wonderful. It’s too bad they had to mislead me with the headline.