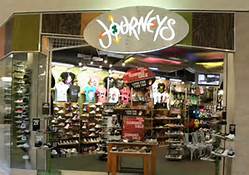 There’s an instructive news story making the rounds about some employees for an apparel and footwear store named Journeys. They quit in the middle of the day leaving an expressive note on the storefront.

This story screams to both my high-brow Libertarian ideology and to my deeply guttural personal life. This story is about the human experience, about capitalism, about self-loathing, and about self-respect. It’s got it all and I aim to tell you why.

First the facts. Three employees at a Journeys store left in the middle of the day without notice. The store manager, co-manager, and one worker simply closed the front door, pinned a note to it, and left.

We don’t know if the injustices that caused the employees to take such drastic action were real or imagined. We can hear stories from all sides and still not know for certain. The fact is, it’s unimportant to my discussion.

I once worked in an environment where the boss was intentionally unfair. Cruel for the joy of cruelty. I arrived early in the morning and was looking at the clock hoping for the end of the day within an hour. I lay awake at night my mind and stomach churning. I hated it. For nearly nine months I lived it. But, that’s not important either.

We excuse ourselves because we “need” the job. We don’t. You don’t; as much as you think you do, you don’t. I know it seems like you need that job but every day you spend there is a day of you life lost. A day you’re not out there finding work with people you respect, who respect you, who respect their business. It’s one more day that you turn into a bitter, self-loathing person who sneaks out when no one is looking hoping to hurt other people. The kind of person who pins nasty notes on walls because you’re too cowardly to stand face-to-face with those who hurt you.

The first time someone treats you like that stop right there and tell them you will not take it. There’s no need to yell, to scream, to whine about the unfairness of life. Explain, calmly and rationally, that you don’t like being treated that way and that you won’t accept being treated that way. If they fire you, you’re better off.

Here’s an excerpt from my book, The Sword of Water.

Jon nodded his head and smiled narrowly at the girl, “Exactly. I say that there is much to fear. Sorus suggests we must use caution because of those dangers. He is not far wrong, but we must never succumb to fear. Fear is the tool of evil. Fear is the tool of the despot. The first time you hid from your siblings you did so because of fear. Did that help you?”

“No,” said Silenia, blinking back tears as the memories flooded into her mind with such vividness that she suddenly felt back in that place, hiding, always hiding. “Eventually I had to come out and they used the flat of the knife on me,” she sniffled.

“Yet was it ever easier to hide the next time and the time after, wasn’t it?”

Silenia nodded her head, pursed her lips together, and stifled another sob, “It got easier each time.”

Not only does an employee who refuses to stand up to a bully hurt themselves but they hurt every employee who follows them, they hurt the business, and they hurt capitalism. If everyone refused to work for nasty people but instead flocked to jobs where good people treated employees with respect and with fairness; the whole system works.

Don’t get me wrong, fairness doesn’t mean you get paid for lazing around. Fairness means you work hard, next to other people working hard, and you make good money doing it. That’s American! Or it used to be. If the job needs you to work an extra three hours that night, you work it but the boss gives you the morning off. If the boss can’t give you the morning off then you get a bonus. That’s what I mean by fair. That’s what works, for business, for people, for our country.

Leaving in the middle of the day when there’s work to be done isn’t fair, it’s not right, and it’s a sign of having no self-respect. I can’t excuse it. I won’t. The boss treating an employee like garbage because they can get away with it? That’s just as cowardly, just as sick, just as filled with self-loathing.

This story? It’s a lesson all right, a lesson in everything that’s wrong.