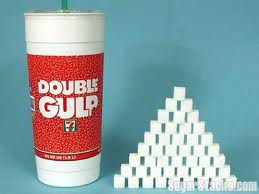 My post the other day about the dangers of idealism leads me to today’s topic, The Great Soda Wars.

There is a proposal in New York by the mayor, a former Republican now Independent, to curb the size of soda containers. The idea being to limit the large, single serving, soda containers which are now up to 64 oz. The medical dangers of being overweight are well established and soda seems to be one of the prime movers of that phenomenon. The article goes on to list other dangers of drinking too much of the sugary beverage.

The government does have a duty to protect its citizens and dangers come in many forms. However; I’m not sure that drinking myself to death classifies. There is an interesting correlation with Prohibition in which alcohol was banned because of its deleterious effects. This didn’t work out so well. However, in this case they are not banning soda but simply limiting a serving size. One argument against this is the Slippery Slope idea wherein if we allow one supposedly “good” law to pass it will lead to more drastic and “bad” laws. I’m not a big fan of the slippery slope argument, let us judge each piece of legislation on its own merits.

Let’s take a critical look at the legislation. The problem it hopes to solve is the imbibing of huge amounts of soda. The solution proposed is to limit the container size available. This would prevent someone from making a single purchase of a large soda but there doesn’t seem to be much to prevent them from going back for a second soda or even bringing their own, larger, container, purchasing two or three, and then filling said cup. Thirdly it artificial removes a purchase option for consumers and a sale item for retailers. One that the consumer wants and the retailer makes a profit from selling.

Again, the only real benefit I see is that some people might stick with the smaller single serving when they might have otherwise been tempted by pricing schemes to purchase the larger container. I just don’t see this as a big enough bonus to enact such legislation. I’m not totally opposed to government intervention to increase the health and safety of Americans but if there is going to be such legislation the benefits must be overwhelming and the danger clear.

On the whole I think the only real solution is to educate people as best as possible to the dangers of too much sugar or too much alcohol or too much heroine. Next, teach people how to think critically and make good decisions. Hooray, problem solved!

Ok, not really. We can’t force people to behave in a non-destructive manner and maybe we should give up trying. Instead give them information and the ability to think clearly.

This whole debate does make me think about Jamie Oliver and his quest to bring good food to schools. I think I’ll soon post about how a capitalistic strategy trumps legislative attempts. See you then!

Thanks to the guys at the lunch table for helping me think this post through!

Tom Liberman
Sword and Sorcery fantasy with a Libertarian Twist
New Release: The Hammer of Fire!