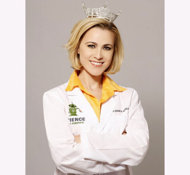 I read a fascinating article at Yahoo yesterday about a woman named Erica Ebbel Angle who has a television show aimed at promoting science to Middle School students. Oh yeah, she’s also a graduate of MIT, has a Ph.D in Biochemistry, and has entered a few beauty pageants.

The reason this seems to be causing an issue is she is calling herself the Princess Scientist and some people think this is a bad message for young girls. That being pretty is of equal importance to being smart. I don’t think that’s the message at all but some people are up-in-arms.

The first thing I’d like to look at is the general pairing of pretty or athletic with stupid. Like most stereotypes it’s not completely unfair as many very athletic or very attractive people are not motivated to spend time on their education. Likewise it is completely unfair to associate stupidity either with athleticism or beauty in the individual. We had a player here for our local St. Louis Cardinals baseball club who was both an outfielder and graduated college with a degree in aerospace engineering.

There are plenty of intelligent athletes and beauty queens and many unintelligent, less athletic, unattractive people. There are a great number of people who fit into all combinations of both groups. It’s not correct to associate or disassociate one attribute with the other.

I think this is the root cause of the issue. People are unhappy with Dr. Erica because she is saying it’s fine to want to be attractive. There is an intellectual backlash against putting beauty in front of intelligence in this country and I’m not opposed to that idea but if you want to promote being attractive and intelligent then I see no issue. Not only is there not a problem but it’s a good thing.

Life isn’t just about being smart. A brilliant scientist who takes no time for personal hygiene is largely unwelcome in social situation and cannot use that intelligence to its best advantage. Why not encourage young women to pursue the sciences and be attractive at the same time?

The argument goes that time spent primping on beauty takes away from schoolwork. I’m not an expert on primping for beauty but the time I spent playing sports was good for me. My time at the gym working on my physical body helps me mentally. Life is a combination of attributes and we do well to work on many fronts. Would we tell a husband and father to ignore his kids to perfect his work? Time being a good father makes for a better worker.

All you girls and boys out there. Play sports, look good, but study in school. It’s not that hard to study and I regret not being a better student myself. I was too concerned with other things and that has limited me. Broaden yourself in every respect. Obsessing your focus on a single topic eventually tends to makes you a strange, unhappy person.

And for you adults who want to limit your children to one thing or another, shame on you. Encourage your children in all their endeavors.

P.S. While there is an intellectual backlash against putting superficiality over intelligence the reality is our society largely promotes that idea. We worship the beautiful and athletic while ignoring the scientific achievers. That’s wrong and dangerous to society. Perhaps fodder for another blog.