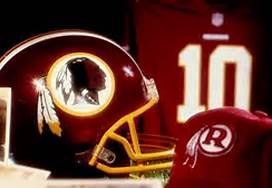 There’s been a lot of talk in recent years about the use of Native American nicknames for sports teams. Many people think some of these names are derogatory in nature and would like to see changes.

The most prominent case is the Washington Redskins who are under moderate pressure to change the team nickname. Meanwhile throughout the country there are many schools and teams that use the word Redskins to reference their mascot. The origin of Redskin is somewhat in dispute but it is generally recognized as a pejorative term. Not everyone feels this way though. The name Redskin is almost always used with pride when in reference to the school mascot or team.

There are certainly any number of Native American names used within the English language with fully 26 states having such names. Professional sports teams include the Chicago Blackhawks named after Sauk leader Black Hawk.

We also see the Kansas City Chiefs, the Atlanta Braves, the Cleveland Indians, the Atlanta Hawks, the Golden State Warriors, and countless colleges and high schools with such monikers. My own high school, University City, changed their nickname from Indians to Lions in response to such pressure. The Stanford Cardinals were once the Stanford Indians.

The question is if teams with such names should change them to be less offensive.

There is a lot of passion on the subject. People who have cheered for their teams for many years certainly do not consider the names to be derogatory or negative. They take great pride in the names. Likewise there will always be those who consider certain words to be negative in meaning; Redskin, in general use, is a far more derogatory term than Chief, Seminole, or Brave.

I’m going to take the middle-ground on this controversy. If a team, writer, college, or person wants to use the term, particular when they use it in a positive way, then they absolutely can do so. Likewise, if the owner or college or whatever decides to change the name because they feel it is a net negative then they can do that as well. It’s up to them and it’s their decision to make, not mine.

If Dan Snyder and the Washington Redskin’s organization says they won’t change the name then I support that decision. If the Neshaminy high school Redskin’s editorial staff chooses not to allow the use of the word then that’s their business. Students that feel differently can get on the editorial staff next year and reverse the ban.

There is no doubt that words carry power and I’ve written on that subject a number of times. If I say something offensive then I might suffer consequences but it’s my decision to say it, not yours.