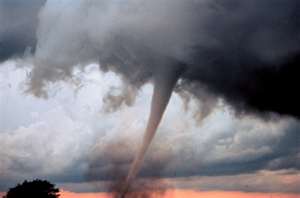 The events in Dallas as graphically displayed all over the news with dramatic videos made me think about the predictions of tornado activity in the climate change models. I really don’t know much about it but here’s to the internet and research!

First things first though. Why is it that the plural of tornado and volcanos can be correctly spelled with an “e” or without an “e”? If anyone knows the answer please help me out. I like it better without so no one yell at me for grammar errors … that means you mom.

Ok, back to the question at hand. What effect, if any, does a change in average temperatures on the planet have on tornado activity? It certainly seems like the tornados have been big and damaging in recent years but the spread of population has something to do with that. In that past tornados might hit in areas that were unpopulated but are now homes to large and small cities.

Tornados are rated by the Enhanced Fujita scale with EF5 being considered the highest. There is also the Fujita scale and the TORRO scale but it doesn’t really matter as we are simply trying to determine if tornados have gotten more severe and frequent as the temperature on earth has risen over the last century. Yes, by the way, the temperature has risen, I’ll get to that soon.

The United States is a good place to test for increased activity as we have four times as many tornados as all of Europe and far more than any other single country. This apparently has to do with being in the middle of a large continent that has both a very hot region (Mexico) and a very cold region (Canada). In the United States records for the last decade indicate about 1,200 tornadoes a year. Adequate records do not exist before 1976 making comparisons to different eras all but impossible. Still, the mechanisms of weather that trigger tornadoes are fairly well understood.

When cool and warm air meet the conditions are right for tornados which generally occur in the Spring and Fall when seasonal temperatures are in fluctuation. The mostly deadly tornado happened in 1925 but the largest outbreak in frequency, again in the extremely short record keeping history, occurred in three days of April 2011 when 353 tornados eclipsed the previous record of 148 in a similar period of time. A significant statistical outlier although the short time frame of record keeping makes for much guesswork. With such little time frame to work with the best guess seems to be that tornadoes might come in ten-year cycles and the 1980’s seem to have been a low cycle.

Tornados also tend to occur between 3:00 and 5:00 p.m. apparently connected to the fact that this time frame is also when peak atmospheric heating is in place. The recent Dallas area tornadoes occurred in the late morning.

Any guess as to the effect of global climate change on frequency and severity is, at this time, merely speculation. Warmer sea temperatures increase atmospheric moisture content which can increase severe weather, including tornadoes, particular in the cooler seasons. The change in sea temperature, which I covered yesterday, can also effect jet stream patterns which might in turn have some influence on tornado frequency and severity.

But, all the evidence at this point doesn’t seem to indicate a direct relation between increased tornado activity and the increased temperature the earth is currently experiencing. Nor does evidence rule out such influence.

So, if anyone tells you the increase in tornados is without a doubt caused by climate change or that climate change is absolutely not responsible for bigger and more frequent events … you tell them they need to go back and get more evidence!