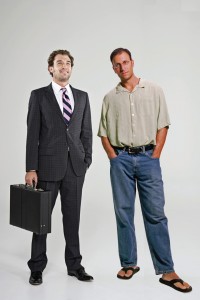 I recently wrote a blog about catcalling and it elicited a reaction from reader that I found interesting.

The main gist of the argument against me was that women shouldn’t be judged by their appearance but for their intelligence and personality. I suppose this is a fine sentiment but it is completely unrealistic. We are all judged by our appearance and even within that there are nuances. While we certainly don’t have much control over the size of our nose we do have control over the clothes we wear and the way we present ourselves.

If a woman wears a low-cut blouse and a push-up bra she is choosing to present herself in a certain way and men are going to react in a certain way. There is no denying this fact. It’s like saying someone who goes to a funeral in ripped jeans and a t-shirt shouldn’t be considered rude and treated as such. The same goes if a bridesmaid arrives not in the dress the bride chose but in something completely different.

I’m certainly not suggesting that a woman is asking to be harassed by men yelling out crude comments but the reality is that men are encouraged to approach women and engage them in dialog. It’s not an easy line to define to be certain. The original article I wrote concerned a woman who found herself continually shouted out on her way to work while wearing a business outfit. There are plenty of men who catcall in an unwanted fashion and the woman did nothing to provoke such behavior. My point is that it’s unreasonable to expect all men to avoid saying something to a woman because it’s possible that woman might consider such an advance unwanted. If a woman attends a party and a fellow she isn’t interested in approaches her, she rebuffs him, but at the same event encourages a man she does find intriguing. How is the man supposed to know ahead of time whether he will be found acceptable or not?

Even that’s not really my point in this blog. We are judged by our appearance and to do so is completely human. We judge people by their appearance every day. It’s in our nature. A woman who wears certain types of clothes will be judged for wearing them. A man who wears certain types of clothes will also be judged for it. It’s certainly not the most accurate way to judge a person but it has value. Someone who dresses in a certain way is consciously presenting themselves in that fashion. It is fundamentally different from a large nose or big breasts. These are things we cannot easily control. Our dress speaks directly to conscious decisions we have made and it is therefore reasonable for people to judge us based on our clothes.

Don’t get me wrong. I think aggressive catcalling when it is apparent the woman isn’t interested in inexcusable. However, if a woman is looking particularly nice it’s not unreasonable for a man to offer a compliment or two.

It is a woman’s job to dress appropriately and be aware that her clothes will illicit certain responses. To pretend otherwise is to simply live in a fantasy world. It’s also the man’s job to be aware of signals when a woman is receptive and when she is not. It is certainly all of our jobs to communicate effectively when people around us are behaving in ways we don’t like. Even then we can’t control their reactions completely.

When I’m at the football game and a fan is behaving boorishly I can sit there and take it or I can say something. Once I’ve said something the situation is largely out of my hands. If the fan continues to act horribly I can escalate by bringing in authority figures or I can simply accept their behavior and attempt to ignore it. Life is rather messy in this way. If a man is catcalling a woman she can ask him to stop, tell him to stop, but she largely can’t make him stop. If he wants to continue he can, it’s rude, nasty, boorish, and just plain mean, but that’s life.

Dress how you will, but don’t pretend it will not illicit certain reactions, whether or not those reactions meet with your approval. Fair? No. Life? Yes.

2 thoughts on “How you Appear Changes how People Treat You”