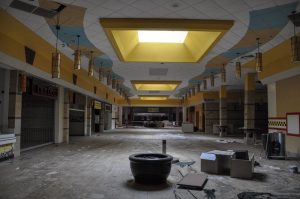 Newsflash! American brick and mortar retail stores are closing in record numbers. What sort of genius do you have to be to figure out why? Not much of one. Total sales aren’t going down, just sales in such stores. More and more people, me included, are purchasing online.

Yet every time I read an article in one business publication or another about how malls are losing their anchor stores and closing down in record numbers, the comment section is filled with tirades about President Obama or President Trump. Filled. I’m not willing to start counting comments and tell you what percentage want to lay blame on one of the two major political parties. Nor will I bother figuring out how many rational people explain there is no blame to be laid, it is simply an example of changing market environments.

This is what happens. This is why buggy whips, to use the example from the hidden gem Other People’s Money, are no longer manufactured in large numbers. This is economics. This is capitalism. While many people benefit from this there are, and always will be, losers. The people who lose their jobs in the malls. The companies that go out of business.

In the end capitalism will benefit the majority of us. We get a product at the price we want without having to leave the comfort of our Tom Pagnozzi locker room chair given to me as a gift many moons ago. I love this chair but that’s beside the point.

It’s obvious why malls are closing. Everyone knows the root cause. It’s not rocket science. I don’t believe people are so stupid as to think political policy is driving this trend. I think their motivation is to convince someone else to further their political agenda.

What can we do about this? You certainly can’t argue someone out of their position on this because they really don’t believe it anyway. You can call them stupid if you want but that’s not really helping matters. You can certainly ignore them and that’s largely what I do. I think often times that’s the best strategy. Don’t get into a pointless debate. Don’t call them idiots. Don’t get enraged. Simply ignore them.

The other possibility is to do what I’m attempting to do here. Plainly, clearly, logically, and without malice lay out some facts. After that it’s just not your responsibility any more. You can’t think for other people, speak for anyone else, or act for anyone else. Do what is in your power to do.

The world would be a better place if we all could ignore provocation and follow the excellent advice of the Hitchiker’s Guide to the Galaxy. Don’t Panic.