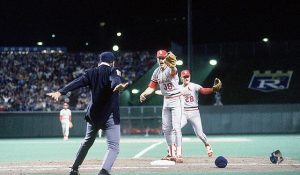 I did not watch the NCAA Basketball Championship game between Gonzaga and North Carolina but the articles in the various sports websites I visit seemed to indicate that the referees intruded fairly heavily. This usually means they called a lot of fouls. There are two points of view on this.

One is that officials should let the players play the game. This means not calling many fouls. The problem there is when the players realize the officials aren’t going to call anything other than obvious fouls they start to play outside the rules of the game. Things can get ugly and out of control when that happens.

A second idea is that the officials are right to make the calls and the job is difficult. This sometimes means that the flow of the game is disturbed and it is less enjoyable for the audience. The audience essentially provides all the revenue and without them there isn’t nearly as much money to be made.

Is there a solution? It’s not easy but I harken back to my days of playing sports as a lad. In street games there was no one officiating at all and even in some organized sports like the high school tennis I played, it was up to you to perform self-refereeing.

I remember those days with fondness. When we called our own games. The general idea was that if you made a bad call your opponent had the ability to do the same thing. This meant that you generally called the game fairly. If you didn’t catch the ball in baseball you said you didn’t catch it.

I understand the stakes were considerably smaller on the playground than in the NCAA Championship and the temptation to make an unfair call is significantly greater. Still, there is part of me that imagines if we remove the officials from the game, players are going to be more likely to make accurate calls on themselves. It is the presence of officials that lead to more bad calls. I remember many games where an official made a horrible call and my opponent knew it but said nothing, or vice-versa. I think that in most cases we would never have made the bad call if left to our own devices.

Tom Liberman
Sword and Sorcery fantasy with a Libertarian Ideology
Current Release: The Gray Horn
May 2017 Release: For the Gray