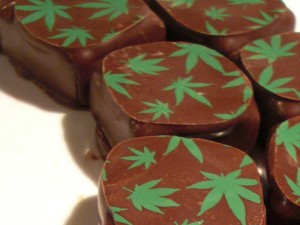 The Centennial State of Colorado was the first in the Union to make marijuana legal to all adults and ever since those opposed have been trying to find loopholes in various regulatory laws to peel back the stated will of the people. It’s enough to make this libertarian have a sip of his wine that is sitting in his unlabeled glass looking an awful lot like grape juice.

The latest attempt to override the fair and legal vote of the people comes from the Department of Health and Environment of Colorado. They are of the opinion that marijuana infused chocolate and candy poses a threat to children because they could accidental ingest it. This is true. It’s certainly possible for a child to eat a brownie that has pot in it. It’s also possible for a child to drink any of a number of alcoholic drinks that taste like candy. It’s also possible for a child to eat a slice of rum cake or a bourbon infused chocolate. It’s possible for them to eat a pill that looks like a vitamin. Parents that have such things in the house would be wise to inform the children of their danger and keep them in safe places.

Marijuana chocolate and candy is clearly labeled. It is only when the label is peeled and a person starts to consume the item that it is no longer labeled. A lollipop in its wrapper is marked as having marijuana in it. The forces at work here hope to convince you that they are doing it on behalf of the children just as they were against the legality of marijuana to save the dogs. The reality is they are against the legalization of marijuana for other reasons but they lost fairly in a voter initiative and don’t like it. This is modern government at its worst.

If they really believe that marijuana is such a danger then they need to take their chances with the voters. I’m guessing they know this route is hopeless and therefore have decided on another avenue. I’m certainly not saying they don’t have the right to try and convince legislators to overturn the will of the people. That’s what a Representative Republic is all about. The will of the people is secondary to the legislative power of the people’s representatives. If the representatives pass laws we don’t like then we have the ability to remove them. They have the right to pass any law they want as long as it doesn’t conflict with our rights as laid down in the Constitution.

What I especially despise is the largely Republican led effort that tells us quite clearly the state needs to be in charge of our lives. That we cannot manage to keep our children safe without the government telling us what we can and cannot have in our houses. That because a few people are not careful with their marijuana infused products that the rest of the people of Colorado must give up their freedom so that the government can protect them.

Marijuana products are clearly labeled. That’s enough. The government cannot and should not protect us from every ill that might befall us. I despair for this country.

I always tell my friends that if they truly understood the core philosophy of a Libertarian they would join us. I’ve always believed that most people really want a limited government that helps where required but largely allows people to make their own way in life. I’m beginning to suspect that perhaps I was wrong. Perhaps most people really do want to tell everyone else how to live. That they want to tell me what weapons I can own, what food I can willingly and eagerly put in my body, with whom I can have sex, and what I should believe as far as religion is concerned.

People apparently want a police state that guarantees them safety while looting them of their freedom.